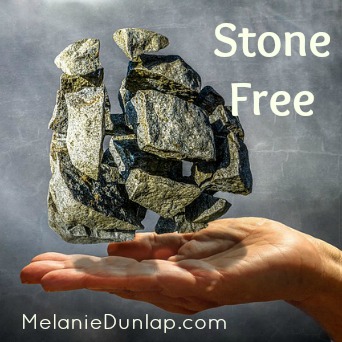 We had to be at the hospital by 9:30am. Tom’s kidney stone was getting blown up.

It was the 28th of December. One last surgery before the end of the year.

In the car, the 3 of us couldn’t help but talk about the fact that the hospital was right across the street from where all my cancer surgeries had been. We had made this trip too many times this year.

Tom was in a good mood. There hadn’t been anymore excruciating pain since the emergency room visit 10 weeks ago, but he did admit that there had been some tension in the area ever since.

I was glad he was in a good mood because I was anxious enough for the both of us. His lithotripsy was supposed to be an easy procedure but the fact that it was in a full-blown hospital made it feel like a big deal to me.

Check in was quick and we were sent up to the surgical floor. The waiting room was full of people so we hunted around until we found 3 seats together. I could tell we were all trying to keep the conversation light while we waited for a nurse to call his name.

The nurse that came for him seemed distracted as she told me that he had to go alone to preop and that I could come back to see him when they had him ready. I was shaking a little as I kissed him goodbye.

That was when I realized that it had been easier for me to be a patient than it was today to be the loved one waiting. I thought about how many times my loved ones had been on this side of a surgery door over the summer and how hard that must have been for them.

I practiced deep breathing as I looked around the waiting room. I love people watching and this was a perfect place for it. Even though it was a surgery waiting room the energy wasn’t as overwhelmingly fearful as I had experienced in the oncology and radiation offices across the street.

One man and woman stood out from the rest, they had obviously been here for a while and the worry they were experiencing was evident. We were seated close to them and I couldn’t help but overhear them talking on their phones. I wasn’t really paying attention but every once in a while, something sounded familiar.

I felt myself gasp when I put the pieces together.

A woman was having a mastectomy and reconstruction for treatment of breast cancer. It was expected to take 5 hours.

I looked away and tried not to think.

Soon after a nurse came out and took us in to see Tom. He was wearing the fashionable hospital gown, his IV was in place and he had on his nonskid socks. I asked what his blood pressure was when they took it and laughed when he told me how high it was. His white coat syndrome always made it ridiculously high.

He was calm and chatty as he patiently waited his turn.

A young nurse came in to check on him and noticed that he wasn’t wearing his stylish blue hair cover. She dug around the edge of the bed and found it. They both laughed as she put it on his head and tried unsuccessfully to get all his hair in it.

After she left the room I went to his bedside to tuck the remaining hair up in his cap. As soon as I touched him my heart leapt to my throat and I got scared. I quickly turned my head away as I held back tears.

Right then I felt myself drop into my heart and call on all the powers that would hear me. I surrounded him with love, light, God, Goddess, angels, dragons, fairies and every other healing spirit I had ever known. I couldn’t be with him in surgery but they sure could….and would.

We kissed him bye when the nurse came to take him to the operating room and we could hear the two of them laughing about her driving as she pushed his bed down the hall.

As they rounded the last corner I could almost see the spiritual beings that were surrounding him.

Everything went smoothly and after the surgery he looked great. He was hungry by the time we got him home so after a light meal he dozed on and off the rest of the afternoon. He never needed any pain medication and a couple applications of St Johns Wort oil at the site of his lithotripsy kept him from even having a bruise.

I made sure to drop back into my heart and say thank you.