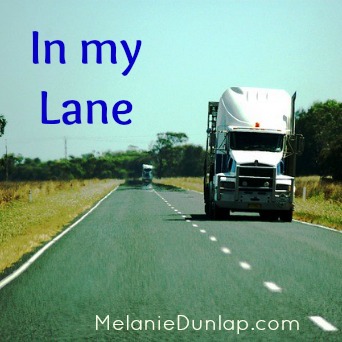 It was a hot July day in 1983 and my car didn’t have air conditioning. I had on a pair of short shorts and all the car windows open as I drove the interstate from Georgia to Virginia. I was 19 years old.

That stretch of I-75 was very familiar to me from having traveled it so much as a child. I was taught at an early age how to be prepared for road travel, everything from how to check the fluids in my car, to always having food, water and blankets in the car.

And never stop for strangers.

I had my leg hiked up in the seat and the radio up loud when I noticed a semi-truck pull over into the lane ahead of me. Having a truck in my lane was not unusual because I-75 is the main thoroughfare for semi traffic on the east coast, but I realized this particular truck had pulled over in front of me several times now.

As I started to pay closer attention I realized that this truck would pass me then get over in my lane and slow down so I would have to pass it again. We kept leap frogging like that for many miles and at one point I saw the right turn signal go on and the truck start to pull over so I went around thinking I wouldn’t see it again.

A little while later I saw it coming up in the mirror.

I finally realized that it wasn’t happening by accident. The driver of the truck was intentionally staying near me on the road.

My 19-year-old self was flattered and more than a little bit excited….and didn’t have the sense to be scared.

Once I understood what was happening the game was on! We traded the lead down the highway and I tried to see what the driver looked like but all I could see was a dark beard and smiling eyes briefly in the mirror as I went by.

I had a romantic notion about truck drivers from movies like Smokey and the Bandit and Convoy. In fact, the movie Convoy cemented my huge crush on Kris Kristofferson that still lingers to this day.

It was interesting to pass the time but after a while I got bored and when I saw a rest area sign I decided to stop. The truck was behind me when I went to get off so I thought that would be the end of our little game.

When I got out of my car I looked over and saw that truck coming down the exit ramp into the rest area. I went inside to take care of business and was headed back to my car without delay. When I looked over at the truck parking area I saw the driver standing beside the truck, he was so far away I couldn’t get a good look at him but I waved anyway.

I got back in the car and was headed for the exit when he came barreling up behind me in the truck and started flashing his lights, turning on his right turn signal and pulling over to the shoulder trying to get me to stop.

Good common sense says that a young woman by herself shouldn’t stop for a man that has been stalking her and flags her down in a rest area.

A tall thin man with a dark beard and hair down to his shoulders walked up to my car and asked if he could borrow my map. He was referring to the road atlas that lay up in my back window. “Of course”, I said and he gently reached in the window to get it.

He opened the map and pretended to be studying it as I got out of the car. He showed me on the map where he had to go and I told him that was very near my home, off the same exit in fact.

I discreetly looked him over, he was very good looking but so thin he didn’t look healthy, he had a full beard that needed a trim and eyes that seemed to look right into my soul when he smiled. His clothes looked like he had slept in them and his hair was a little wild.

We chatted about the coincidence of his delivery being so close to my house until he finally asked me if I wanted to get a cup of coffee at a truckstop that was a few miles down the road. I told him I didn’t drink coffee but I would have some sweet tea with him.

I followed him to the truckstop and we talked nonstop over our drinks. For some reason, I felt so safe and comfortable with him. Then he asked if I wanted to see his truck and I agreed. As soon as I hoped up in the cab the first thing I saw was a map, a twin to the one he had asked to see from my car. He shyly admitted that he never thought I would stop and didn’t know what to say to me when I did so he asked to borrow my map.

We talked for hours in that truck. He made me laugh and I made him soften. It was magickal.

That magick was broken when he looked at his watch and said we should probably get going because we had many miles to go yet and he was on a deadline.

So I did the most logical thing I could think of….I kissed him.

He seemed very surprised and suddenly awkward. But I was 19 and very convincing.

By the time we finally got back on the road we had agreed that he would come to my house after he made his delivery. It was obvious he could use a home cooked meal and a comfy bed.

The next day I threw a duffle bag of clothes up in his truck and hopped in to go ride around with him. I had told my boss that my car broke down in Georgia and wouldn’t be fixed for a week. No one knew where I was or what I was doing. 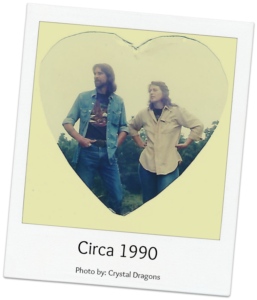 Never before and never again have I so quickly and completely trusted anyone.

This week we mark 33 years of marriage and it still touches my soul when he smiles at me.