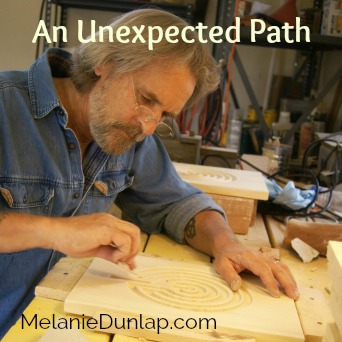 Over the last few years Tom has been growing into the artist he wants to be. More and more customers want custom pieces and have kept him busy with orders. He always has a project going, a cabinet, table, woodburning or bowl….anything in wood.

But it takes a lot of work to keep the Peaceful Spirit Enrichment Center running and most of the heavy, outdoor work is done by Tom. There are trails to be raked, trees to be trimmed, buildings in need of repairs, rocks to be moved and gutters that need cleaning. Not to mention all the digging and other hard work required for the recent septic repairs.

It seems like every day there is something new that needs to be done.

So, it didn’t seem odd that his shoulder was bothering him. He has been working hard for many months. He said it felt like a rib was out of place. He would get a little relief from massage and visited the chiropractor regularly. Still he had a constant dull ache in his right shoulder.

But he’s a tough guy and didn’t complain much.

One day he came into my office from outside and said he wasn’t sweating on half of his face. He has always sweated profusely, drenching his clothes and using handfuls of paper towels to wipe away the sweat. I looked closely and could see the right side of his face was bone dry.

It looked like there was a line drawn down the middle of his face that split it into two halves, the right side was dry and the left was dripping in sweat. His right arm was also dry. The rest of his body was sweating like normal.

The pain in his shoulder was getting worse and the sweating thing was weird so we made an appointment with his doctor. We felt sure he had overworked that shoulder and that there was a lot of inflammation.

We both have the same doctor and on the rare occasion that we go see her it is always together. She greeted us both warmly and asked how I was doing after breast cancer and how Tom was doing since his kidney stone. We joked about how 2016 had been a sucky year for us both but we felt better now.

Except for Tom’s shoulder and face.

She gave him an examination, checked his reflexes and remarked on what great shape he is in. She ordered x-rays that were done in the same office and some blood work to be drawn at the lab right across the parking lot. Everything went smoothly and we were home in an hour.

Tom went back to his studio to work and I got busy on the computer. We were both surprised when the doctor called him that evening after her office was closed.

She said there was a shadow on his lung and they need a better look at it. She scheduled a CT scan for the next day.

She called again just a few hours after the CT scan. They had found a Pancoast tumor on his right lung. She made us feel better when she told us that she had seen valley fever look just like this.

Since he didn’t have any lung symptoms such as coughing or shortness of breath, valley fever seemed reasonable.

But there was the possibility it could be cancer.

I knew it was a mistake but I googled Pancoast tumor anyway. I didn’t like what I read.

And there was something new. Every evening sometime between 5-8pm Tom would double up in excruciating pain. It would usually only last about 20 minutes but it was intense.

It broke my heart to see him in pain.

After two MRIs, a visit to a lung doctor, several calls between schedulers and doctors pulling strings, Tom was scheduled for a biopsy just 12 days after the first x-ray.

He was his usual charming self with the nurse that was prepping him for the biopsy, it was early in the day and he was feeling good. The doctor that would do the biopsy was friendly and explained everything they were going to do.

I stayed with him until they wheeled him down the hall. He looked so vulnerable in that ugly hospital gown. When he rounded the corner and I couldn’t see him anymore I started to cry.

It went quicker than I expected and he was in recovery 40 minutes later. The tears had dried and I was back in protector mode. He had to have 2 chest x-rays with no complications over the next 3 hours before they would let him leave.

It was 5:14pm the next day when his doctor called. She had called both our cell phones but we missed the calls because our ringers were turned down. It was 5:21 when I saw the missed call. I immediately called her office. It had to be the biopsy results.

An answering machine picked up and told me the office was closed but the urgent care was still open. The doctor and urgent care are both in the same office and they share a reception desk and staff. I chose the option for the urgent care side in the hopes that I could get a live person to put me through to the doctor side.

I didn’t want another sleepless night.

A woman answered the phone and I explained my plight to her and she agreed to go see if the doctor’s assistant was still in the office. I thanked her and tried to breathe while I waited on hold.

She came back and told me that the assistant was indeed still there and she would transfer my call to her. I relaxed a little as the phone rang to that extension.

The answering machine picked up.

I hung up and dialed the main number again. No matter what extension I dialed I got an answering machine. I frantically dialed over and over trying to get a live person. According to my phone log I called 14 times in 6 minutes, each time getting that damn answering machine.

Finally, I looked at Tom and said let’s get in the truck and go down there right now. I knew it was a long shot but she is only 10 minutes away and this was important. By now it was 5:35 and I wasn’t sure anyone would still be there but it was worth a try.

Suddenly my feet felt like lead and I hesitated. Tom took me by the hand and guided me through the door to meet the doctor. He smiled at me to try and ease my fear but I could see the worry in his own eyes.

The doctor shook our hands and offered us a seat in her office. I apologized for the unconventional way we had arrived after hours but she didn’t mind. She had in fact called us with the biopsy results.

The biopsy showed that the tumor on Tom’s lung is cancer.