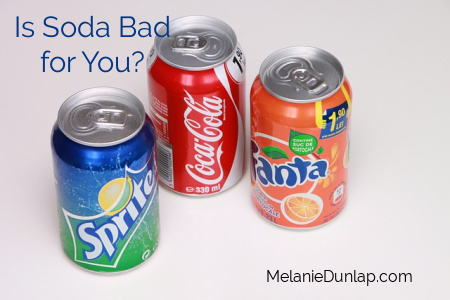 You’ve probably heard the saying “you are what you eat”. It is also true that you are what you drink. And unfortunately what we drink is often unhealthy, full of chemicals and has enough sugar to cause an addiction.

Depending on where you live, it can be called soda, pop, coke or soft drink.

Whatever you call it, the results are the same. It causes your body problems.

Soda didn’t start out bad. In 1767 a European man named Joseph Priestly figured out how to infuse carbon dioxide into water, making the first carbonated beverage. People believed that carbonated water cured illnesses so “soda” was sold in pharmacies. Pharmacists mixed nasty tasting prescriptions into soda to make it easier for people to take.

Soda was a health remedy until the creation of root beer in 1876 when it became a drink option.

Cola flavored soda arrived in 1881 and Dr. Pepper was created in 1885. On May 8, 1886, the first glass of Coca-Cola was sold at Jacob’s Pharmacy in downtown Atlanta.

In 1902 the first vending machines were set up in the U.S., giving Americans easy access to soda. Sales of soda climbed considerably in the 1950s with the invention of the easy-to-open soda can.

Soda and Your Health

As early as 1942 we knew that soda was a health issue. The American Medical Association recommended Americans limit their intake of added sugar in diets and specifically mentioned soda.

Today, the scientific community refers to soda as sugar-sweetened beverages (SSBs). The annual consumption of soda  in the U.S. rose from 10.8 gallons per person in 1950 to 49.3 gallons in 2000.

All the while evidence piled up about the dangers of soda:

What Makes Soda So Bad

First, it’s the sugar. A 16oz bottle of cola has about 44 grams of sugar. The top-ranked popular soda brand in America is Mountain Dew, coming in at 61 grams of sugar in a 16oz bottle. Even more disturbing is that 16oz is a small soft drink at a restaurant. Convenience store cup sizes go up to 52 oz!

The FDA recommends that people limit their sugar intake to 25 grams of sugar per day.

Just one small soda gives you more sugar than is recommended for the entire day!

To make matters worse that soda is going to make you gain more weight than if you ate food. When you eat sugar in food your body’s metabolism and digestion work to break down the sugar properly and signal your body that you are full and to stop eating.

When you drink your sugar, the body doesn’t recognize those calories as food and the soda doesn’t make you feel full. This causes you to still be hungry, so you also consume food. The excess calories and sugar from the soda get stored as fat.

Then there’s the chemicals.

Not only is the amount of sugar in soda an issue, it’s also the type of sugar. First developed in 1957 by two biochemists, high fructose corn syrup wasn’t widely used until the process of producing it efficiently and economically was developed in Japan twenty years later.

In the 1970s high fructose corn syrup became a staple of the food and drug industry due to the escalating cost of cane and beet sugar. This artificial sugar has no essential nutrients and is connected with increased health risks.

In 1984 both Coca-Cola and Pepsi stopped using real sugar in soft drinks, replacing it with high fructose corn syrup.

Phosphoric acid is another chemical to be concerned about. Phosphoric acid contributes to bone loss. According to studies, soda consumption has been linked to low bone mineral density as well as increased risk of fractures.

All sodas include natural flavors. Those should be alright, shouldn’t they? After all they’re natural.

The FDA allows food companies to use the term “natural flavors” to describe any food additive that originated in nature. Almost all natural flavors have solvent and preservatives added to them. Those chemicals make up 80-90 percent of the volume of a natural flavor.

And those additives are designed to be addictive. In 2011 one of the biggest corporations in the flavor industry admitted that their goal when creating flavors was to make them addictive.

What to Drink Instead

The beverages you drink should add to your health, not take away from it. Try drinking these instead of soda.

Water: It contains no calories and is the easiest drink for your body to use. Drinking water is important to prevent dehydration, lubricate your joints, regulate body temperature and get rid of waste through urination, perspiration and bowel movements. If you don’t like plain water, you can add sliced citrus, cucumbers or mint to add some taste.

Herbal Teas: Another no calorie drink. Herbal teas provide taste without caffeine or added flavorings. They can be consumed  hot, cold or room temperature. Try ginger or peppermint tea to help your digestion. Hibiscus tea makes a great summertime refresher. By working with an herbalist you can also make your herbal tea blends support your health goals.

Golden Turmeric Milk: Sometimes called turmeric tea, this golden colored beverage is made with turmeric, warming spices and a creamy base. The curcumin in turmeric has anti-inflammatory properties and can boost your mood.

Coffee: You may be surprised to see coffee on the list of things to drink, but moderate coffee intake actually has some benefits. Just remember that the coffee is what is good for you. If you put sugar and/or high fat, high sugar creamers in your coffee you aren’t doing yourself a favor. Having 2 cups of coffee a day is linked to a lower likelihood of type 2 diabetes, heart disease, liver disease and even depression.

Making change isn’t always easy. Getting away from addictive sodas can be a challenge but the benefits will have your body thanking you.

4 thoughts on “The Dangers of Drinking Soda”