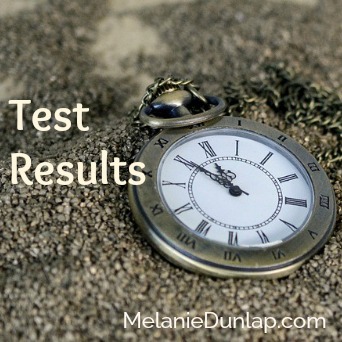 Time seems to both drag and speed by when you are waiting for test results. Most tests have some amount of anxiety associated with them because they are after all a test. But waiting for health test results does especially weird things with time.

Tom’s appointment is at 10:00am. We’ve done the trip so many times that we have the drive time down perfect and arrive the requested 10 minutes early for his appointment. The waiting room is packed. We get the last two seats together and we’re in luck because they face the television.

I have to make an effort to keep my energy from getting jumpy. For my sake and everyone else’s. There is enough uneasy energy in the room without me adding to it.

As usual the television is on HGTV. Seeing something be remodeled, repurposed or redecorated is an easy way to pass the time in a waiting room. All the doctor’s offices show the same channel now. That’s why we can’t watch these shows at home anymore, they remind us of these visits.

On a good day in the waiting room you don’t get to see an entire show. Today it was Flea Market Flip and it started soon after we arrived. In a half hour show people buy junk, make it beautiful and sell it. Whoever does it best wins money. I’ve only watched it in waiting rooms, so I don’t know all the nuances.

We watched a whole episode from start to finish.

The doctor was running over an hour behind. I wanted him to hurry but at the same time I just wanted to sit there with Tom, watch HGTV and shut everything else out.

Finally, the nurse called him back to the room. She apologized for the wait while she took his vitals. He looks way better than the last time she saw him, and she tells him that. The door closes behind her and we sit quietly waiting for the doctor.

He bustles in looking harried and apologizing for running behind, his assistant is out sick, and he is on his own today. He is quiet while he looks over Tom’s test results.

Again, time seemed to go by instantly and take forever. In reality it was just a few moments before he looked up and said, “there is significant improvement.”

I didn’t know I had been holding my breath until I heard those words and stared to breathe again. Tom looked over at me and smiled, the relief on his face was evident.

Then the roller coaster went the other way.

“It’s not gone,” the doctor said, “but the tumor is smaller, and the activity is down. There is some damage from radiation.”

My head was swirling, significant improvement should mean that everything was gone, and we can put this whole unpleasantness behind us. Why was he still talking?

He started telling us about a new drug that has only had one study and is not yet FDA approved. It is not a chemotherapy but an immunotherapy that would be given intravenously every other week for a year and oh yeah…it wouldn’t be covered by insurance.

The look on Tom’s face showed that he was as stunned as I was. If he has significant improvement why does he need a drug that no one is even sure will work?

“There is a 50% chance of reoccurrence. And if it does come back it will be a stage 4 and incurable.” was the doctor’s reply.

Then that also means there is a 50% chance of NO reoccurrence.

There was some back and forth, but Tom says the drug just doesn’t feel right. The other option is to wait and do another scan. Standard protocol in this situation is to rescan in 3 months, the drug is very new on the scene.

Tom decides to wait and rescan. He has been getting stronger every day and the doctor said that the chemo and radiation are both still working inside his body. We make a follow up appointment and get copies of the test results before leaving.

An elderly man enters the elevator ahead of us and I feel Tom’s hand tremble slightly as he guides me in next. The elevator stops to pick up a woman on the second floor, when the doors open I have a direct line of sight to the office where my mammograms are done. I work hard to keep a check on my emotions. This building has so many memories.

We get to the bottom floor and head out of the building. When we were finally alone on the sidewalk Tom asked what I thought. I said a few unintelligible words then burst into tears. I tried to explain that I wasn’t crying because of his test results I was just overcome with the energy I had accumulated while we were in there.

Crying acts as a vent to let off energy when I am overwhelmed. It’s not pretty but it happens.

I was actually hopeful from what I had heard. The doctor said that supporting the immune system is the best course of action. He may only have one drug to offer but as a trained naturopath I have options.

When we got home, Tom asked me as many tough questions as he had asked the doctor. We made a plan and started implementing the easy things right away. He is no stranger to the dedication and hard work it takes to recover from a major health challenge.

He can do this.