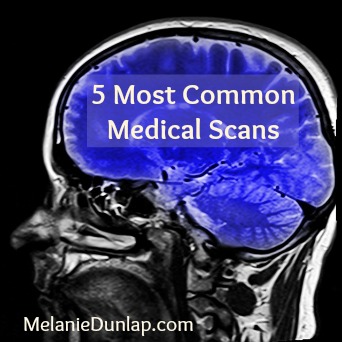 If you have ever gone to the doctor you have probably been sent off for some sort of medical scan. Maybe a simple x-ray or a noisy MRI. But do you know what the scan is and why the doctor chose that one?

Below are 5 common medical scans and their uses:

X-Ray: In 1895, German physicist Wilhelm Röntgen accidentally discovered X-rays—highly energetic electromagnetic radiation capable of penetrating most solid objects. His discovery transformed medicine almost overnight. Within a year, the first radiology department opened in a Glasgow hospital, and the department head produced the first pictures of a kidney stone and a penny lodged in a child’s throat. Today’s x-ray is the most common scan, using a very small dose of ionizing radiation to produce pictures of any bone in the body. It is most often used to diagnose broken bones or joint abnormalities.

Ultrasound: Obstetrician Ian Donald and engineer Tom Brown developed the first prototype medical ultrasound based on an instrument used to detect industrial flaws in ships. They perfected its clinical use by the end of the 1950s. Ultrasound produces pictures of the body’s internal structures using sound waves. It uses a transducer or probe and a gel placed directly on the skin. High-frequency sound waves are transmitted from the probe through the gel and into the body. The transducer collects the sound that bounces back, and a computer turns those sound waves into an image. Ultrasound does not use ionizing radiation, has no known harmful effects, and provides a clear picture of soft tissues that don’t show up well on x-ray images. It is often used to help diagnose unexplained pain, swelling and infection and is the preferred imaging method for monitoring a pregnant woman and her unborn child.

CT or CAT Scan: The inventors of computed axial tomography (also known as “CT scan” or “CAT scan”) were awarded Nobel Peace Prizes for their contributions to medicine and science. In 1972 engineer Godfrey Hounsfield and physicist Allan Cormack were the first to combine x-rays and computer processing to make very detailed images. A CT scan can show differences between solids and liquids and can clearly show tissues and organs. It helps find tumors, masses, stones, and cysts. Sometimes special dyes are injected to make the images sharper. The 3-D images produced by CT scans can also help a surgeon plan for surgery.

For a CT scan, you lie on a table inside a large, doughnut-shaped CT machine. As the table slowly moves through the scanner, small, controlled beams of x-rays pass through your body. You hear a loud whirring or buzzing sound when the machine is running. Movement can blur the image, so you’ll be asked to stay very still. You may need to hold your breath at times. Thousands of x-ray images are collected within one scan. This data is collected in seconds, with no gap between the images. The computer puts the data together to produce a complete and detailed 3-D picture.

MRI: Magnetic resonance imaging (MRI) is a technique that uses a magnetic field and radio waves to create detailed images of the organs and tissues within your body. The first practical medical use was in 1977 after Raymond Damadian, physician and engineer, discovered that cancerous tissue and normal tissue emitted distinctly different radio frequency signals when tested in a beaker. Damadian was seeking a diagnostic tool for cancer, but the technique he pioneered has been a game changer for the brain sciences. Currently, MRI is the most sensitive imaging test of the brain and spinal cord in routine clinical practice.

Most MRI machines are large, tube-shaped magnets similar looking to a CT scanner. When you lie inside an MRI machine, the magnetic field temporarily realigns hydrogen atoms in your body. Radio waves cause these aligned atoms to produce very faint signals, which are used to create cross-sectional MRI images — like slices in a loaf of bread. A longer test than a CT, the MRI can take up to an hour to complete. MRI gives better soft tissue detail than a CT but is not as effective for bone structure.

MRI uses a powerful magnetic field, radio frequency pulses and a computer to produce detailed pictures of organs, soft tissues and virtually all other internal body structures. MRI does not use ionizing radiation (x-rays). A person doesn’t feel anything during the test, but the machine makes a loud thumping sound that can be unnerving. Headsets with music playing can help drown out some of the noise. For more detailed images a dye is given intravenously to produce more contrast in the images. The enclosed space of an MRI machine can make claustrophobic patients very uncomfortable. Movement during a scan can distort the images so lying still is required.

PET: The PET-CT scanner, attributed to Dr. David Townsend and Dr. Ronald Nutt, was named by TIME Magazine as the medical invention of the year in 2000. PET stands for “positron emission tomography”, and a PET scan is a procedure designed to identify abnormal cellular activity that might indicate cancer. A prominent use for the PET scan (or combination PET/CT) is in achieving accurate staging of cancer.

Positron emission tomography, also called PET imaging or a PET scan, is a type of nuclear medicine imaging. Nuclear medicine is a branch of medical imaging that uses small amounts of radioactive material to diagnose and determine the severity of or treat a variety of diseases, including many types of cancers, heart disease, gastrointestinal, endocrine, neurological disorders and other abnormalities within the body. This radioactive material accumulates in the organ or area of your body being examined, where it gives off a small amount of energy in the form of gamma rays. Special cameras detect this energy, and with the help of a computer, create pictures offering details on both the structure and function of organs and tissues in your body.

In a PET scan, the patient is injected with a glucose-based tracer substance: think of it as a “hot sugar”. The PET scan picks up where this sugar localizes in the body. The idea in use for oncology is that the cancer cells, because they’re very active, eat up more sugar than non-cancerous cells and so the cancer cells will collect this tracer and will appear brighter on the scan than normal tissue.

Unlike other imaging techniques, nuclear medicine imaging exams focus on depicting physiologic processes within the body, such as rates of metabolism or levels of various other chemical activity, instead of showing anatomy and structure. Areas of greater intensity, called “hot spots,” indicate where large amounts of the radiotracer have accumulated and where there is a high level of chemical or metabolic activity. Less intense areas, or “cold spots,” indicate a smaller concentration of radiotracer and less chemical activity.

PET scan results are reported in “SUV” units, in which SUV stands for “standardized uptake value”. The SUV is just a measure that indicates how bright the tissue is on the scan; that is, how much cellular activity is occurring in that area. This activity can represent various things, from inflammation to infection to cancer.

How many of these scans have you had? Share your experiences in the comments below.