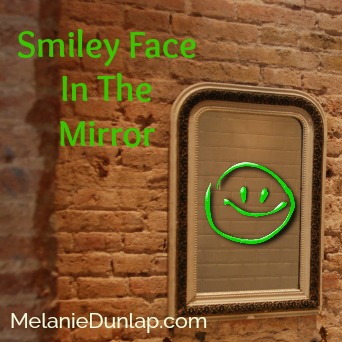 Tom stood looking in the bathroom mirror, “draw a smiley face on it” he said. Always seeing with an artistic eye, he was referring to the white gauze bandage at the base of his throat that he wanted us to draw on. He thought it would be funny to have a smiley face peeking out of his shirt collar.

He was still heavily medicated but that didn’t stop him from drawing it himself by looking in the mirror. The smiley face may not have been a work of art, but it did ease the tension for a bit.

There had been so much raw emotion since getting home from the hospital. We were talking about things we didn’t even want to think about. It was tough.

I am usually the crier of the family and I did an excellent job of it, but mine weren’t the only wet eyes in the house.

The smiley face had a way of making us laugh through the tears.

His surgery was the Friday before a long weekend. We had 3 days without any appointments. He was scheduled to begin radiation and chemotherapy the next Tuesday.

We wondered if that was the right thing.

Then the pain got intense. The week before he had been put on a pain patch and the nurse told us that he still had it after surgery, but as the anesthesia wore off his pain increased. Even though he was taking the pills for breakthrough pain, it got so bad I thought we were going to have to take him to the emergency room.

Finally, we took his shirt off to check on his patch and found out that it wasn’t there. They had accidentally removed it at the hospital. Just a few days later he would have the dosage of that patch doubled just to keep up with the pain…and that doesn’t always work.

It’s scary to think how much pain that medication is masking.

Tom slept a lot and I watched him like a hawk. I warned him that I would be over protective and we would just have to work through it because I’m not going to stop.

That weekend I became more emotionally exhausted than I have ever been in my life. So much so that it affected me physically.

It was supposed to be a quick trip to the grocery store and 1 other stop, a route that I have driven hundreds of times. I was hesitant to leave Tom but he was in good hands at home and I needed the distraction.

I had a short list for the grocery store and quickly picked up everything on it. I was headed for the checkout when I landed in the Halloween isle where I couldn’t help but stop and browse. I picked up some little trinket and my thoughts immediately went to what I would have Tom do with it.

There was a catch in my throat and I started to shake, tears were welling up in my eyes. I set the item down like it was on fire and made a beeline for the self-checkout. There I kept my head down so no one could see me falling apart.

I got in my car and headed for my other stop, a quick in and out. I went through Anthem on a road I know well, turned left on another road I know well and suddenly I was lost. I could not remember where the store was and I didn’t know where I was at that moment. I tried desperately to get my brain to function but it was not working.

I had to pull into a parking lot and sit there until I could figure it out.

That scared me a little.

I got home safely and began to get a better grip on my emotions. There were still more difficult conversations but I felt more grounded and in control.

Partly because of the enormous amount of pain, Tom decided that radiation was the right choice for him. It should shrink the tumor and take pressure off the nerves, relieving pain and restoring the ability to sweat on his right side.

He was still unsure of the chemotherapy.

His first radiation treatment was quick and easy. It was a short ride over to the oncology office where he had an appointment right after radiation. We were both quiet in the car.

Since the surgeon had confirmed the adjoining lymph nodes were involved Tom had some new questions for the oncologist. Tom’s focus is on quality not quantity.

He was his usual charming self when he told the receptionist that he wasn’t supposed to see the doctor that day but he had more questions before he started treatment. Even with the charm, his request threw everything off.

The phlebotomist came to get him and we said no he was going to see the doctor. That was our mistake. We ended up waiting for an hour before they figured out what we needed. To be honest neither of us was in a hurry. We didn’t want to hear more sad news.

Finally, there was a flurry of activity, they called him in and then told us to sit on the bench and wait. That’s where the doctor found us. He had a genuine look of concern on his face as he asked what was wrong. Tom explained about the surgeon’s findings and wanted to know about his quality of life.

The doctor looked him square in the eye and said, “Even though surgery isn’t an option I believe we can cure it with chemo and radiation.”

It won’t be easy. The treatments are long and grueling but Tom is healthy, active and focused.

As he sat in his first chemo treatment that afternoon the physician’s assistant brought us a folder with more paperwork in it. After she walked away I opened the folder and my eyes again filled with tears. I leaned over to Tom with one of the papers and pointed to the words on the page….