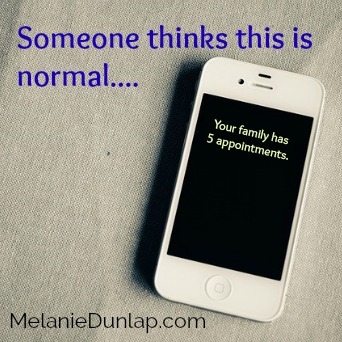 The familiar chirp of my cellphone signaled a text message. For a minute the message didn’t make any sense to me. It was from the scheduling department of Arizona Oncology.

“Reply YES to confirm your family’s 5 appts starting at 11:00am”

Both Tom & I had appointments the same day, we would both see the doctor and have blood drawn, then he would have a chemo treatment. I understood how they got to 5 but it was a shock to see it on the screen.

Then it hit me, they have an automatic program that can notify you when multiple family members have multiple appointments.

Think about that for a minute. That means it is so common for multiple family members to have multiple appointments that it is a normal part of the program.

We are not unique. Other families are going through this too.

My stomach hurt as I stared at the screen. This would be the first time I had seen the oncologist for a breast cancer follow-up in 6 months. In all Tom’s appointments the oncologist had never let on if he remembered me or not.

I was going to find out.

We came as a set that day, Tom and I both filling out our paperwork, side by side chairs getting our blood drawn and together at the scale.

Oh hell no. Not at the scale!

I only keep one secret from Tom and that is my weight.

After the scale we join back up in the exam room. Blood pressure, temperatures and oxygen rates entered for each of us and then we’re left together to wait for the doctor.

How did this happen? Both of us being treated by the same cancer doctor? This is not the reality I meant to create.

Turns out the doctor does remember me and my 3 surgeries and the 3 medications that gave me side effects.

He was stumped when I told him about the excruciating pain in my breast and shoulder that had sent me to the emergency room 12 days earlier. The ER doc had given me two shots of morphine that didn’t touch it and then when they gave me a shot of valium I became unresponsive. Fortunately, some oxygen brought me around. They never did figure out why I was in pain.

Since I was already scheduled for a bilateral mammogram in a few days he examined me and said let’s wait for the results.

Next was Tom’s turn. The doctor asked how he was feeling and listened to his lungs. The lungs sounded good. Tom tried to lighten the mood with a chuckle when he admitted that some things were starting to get difficult.

Things would get worse over the next few weeks.

After visiting with the doctor, it was time for Tom’s chemo treatment. Even though I’m not getting treatment we still come as a set in the infusion room. He gets the big chair and I pull up a small one beside him.

For the next few hours we try to act like this isn’t crazy.