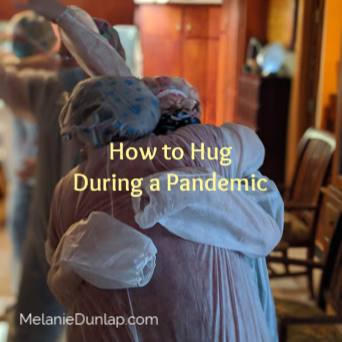 I love a good hug. Not the disconnected, one arm, pat on the back that comes from someone who doesn’t know how to hug.

I mean a real hug. Both arms, hearts facing each other. Even better if it is an energy rich hug.

But then the pandemic happened, and hugging became risky. Suddenly we weren’t allowed to touch each other.

When I talked to the women in my tribe it was clear that we all deeply missed the hugs that are an essential part of our connection.

After the stay at home order was lifted, I decided to have a scaled down version of our monthly women’s circle. Many things changed so we could practice social distancing and keep everyone safe.

The hardest change was not hugging everybody when they came to circle.

Finally the day arrived. The house had been deep cleaned and disinfecting wipes and sprays were everywhere.

When each woman arrived instead of a hug, they were directed to the nearest hand washing station. It wasn’t ideal but at least we were together.

As we shared around the circle each woman made mention of the missing hugs. Our souls were crying out for that connection.

Because we hadn’t been in circle for months there was much to catch up on. New grandbabies, job changes, retirement and health challenges were shared in the circle. All things that would normally elicit hugs from everyone.

We were together in circle, and yet still isolated.

But I had a plan.

A cardboard box sat in the next room with a brightly decorated shawl covering its contents. In the box were plain brown lunch bags bulging to contain what was inside. 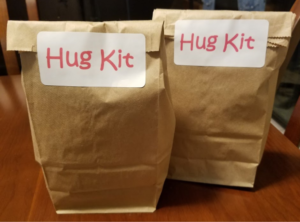 There was only one clue as to the bag’s contents. A sticker on the outside that read…HUG KIT.

My enthusiasm was contagious as I offered the box to each woman for her to take a bag. It was met with quizzical looks and laughter.

“Can we open them?”, someone finally asked. “Absolutely!”, I replied. They tried hard not to tear the sticker as they gingerly opened the bags to reveal what was inside.

It was a hug kit.

The room started to buzz with excitement as the women realized what we were about to do.

If we each put on our hug kit, we would be safe to hug everyone in the group! 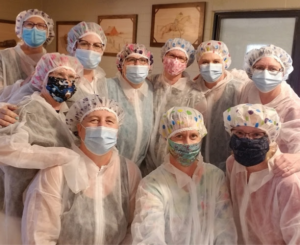 Each shower cap had a different design but otherwise we were all dressed the same, white coveralls and a mask. The nurses in the group said it reminded them of working in surgery.

And then the magic happened. We gave and received those overdue hugs!

It started with a lot of laughter, but our souls quickly took over and we felt just how precious this was. There were no disconnected hugs that day. They were heart to heart and genuine. 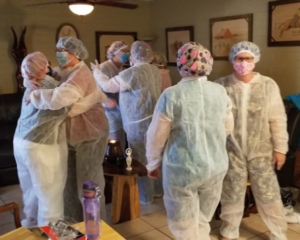 Tears of joy and comfort started rolling down my face before I could even finish hugging everyone for the first time. (Because of course we hugged each other more than once.)

A room full of women excitedly hugging one another in clothes, coveralls, a mask and shower cap gets warm in the summer, so we decided to stop when we began to sweat.

Our hearts were full, and our hug needs were filled. 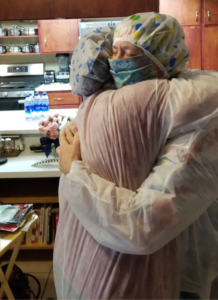 One thing I know for sure is that everyone left that day feeling better than when they arrived.

Health Benefits of a Hug

According to a Harvard Health study hugs not only convey comfort and affection, but they also have additional health benefits. Hugs cause a release of oxytocin, a hormone that relaxes you, reduces anxiety and lowers your blood pressure.

So take care of your health and your soul with hugs!