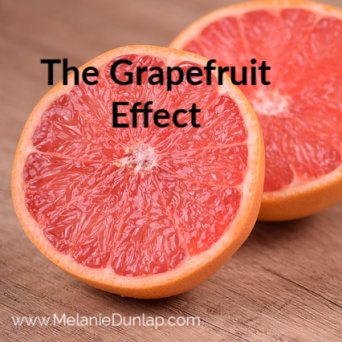 Grapefruit is a super-healthy food… but it has a bit of a dark side.

It can interfere with the metabolism of medications.

This interaction happens with dozens of medications and can lead to unwanted side effects.

If you’re not taking any medications, then you don’t have to worry. But if you are, it may be prudent to hold off on the grapefruit until you double-check with your doctor or pharmacist if your medication is one of the affected ones.

Grapefruit is good for you.

It’s a vitamin C-rich citrus fruit that’s low in sugar and contains vitamin A, potassium, and fiber. It has a low glycemic index and does not spike your blood sugar when you eat it. The pink and red varieties also contain lycopene.

It even had a whole weight-loss diet created around it – the “grapefruit diet!” Research has proven that grapefruit doesn’t have any magical weight loss properties, so don’t eat it just to lose weight.

There is something you need to know about grapefruit if you take medications.

Grapefruit enhances the effects of many medications – over 85 at last count; this is sometimes called the “grapefruit effect.” Taking grapefruit (or its juice) along with certain medications – even a day apart – can increase the risk of side effects.

For example, when taken with certain blood pressure lowering medications it lowers blood pressure too much. This causes lightheadedness and other symptoms.

Another example is when taken with certain birth control pills, women have a higher risk of blood clots.

Grapefruit affects the metabolism of some of the following categories of medications:

When the medication is taken within 24-72 hours of consuming grapefruit or its juice (yes, up to three days later!), there can be an interaction and potential side effect. In fact, for half of the medications affected, the grapefruit effect can be serious. Serious effects include heart and muscle issues and kidney toxicity, just to name a few.

How does grapefruit interact with medications?

Grapefruit (as well as Seville oranges, limes, and pomelos) contain a compound called “furanocoumarin.” It’s this compound that inhibits (stops) an enzyme in our gut (enzyme CYP 3A4) from working properly.

When working properly, this enzyme breaks down and metabolizes many compounds we ingest, including dozens of medications.

When the enzyme is inhibited, like when we’ve consumed grapefruit, this slows down the enzyme. This leads to slowing down of the rate these medications are metabolized and eliminated from the body.

If you slow down metabolism and elimination, this leads to higher than normal levels of medications in the blood – up to 137% higher! This “enhances” their effect and can cause those side effects.

When medications are prescribed at certain doses to be taken in certain time frames, this is based on the medication being metabolized normally – not way-too-slowly.

Since one glass of grapefruit juice can affect the enzyme’s function for over 24-hours, it’s advisable to stop eating the grapefruit or drinking its juice altogether while you’re taking certain medications.

If you love eating grapefruit or drinking its juice and are taking medications, talk to your doctor or pharmacist to see if this affects you. Many medications are not metabolized by this enzyme, and even if they are, this grapefruit effect may not pose a serious risk for all of those medications.