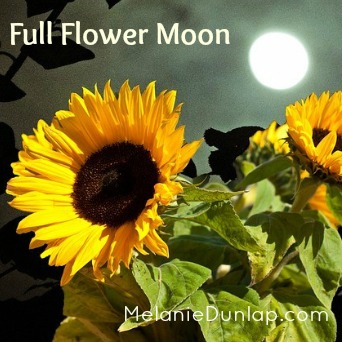 The full moon in May is called the full flower moon. But who cares?

Turns out many of us do care. You see we follow the cycles of the moon. A great keeper of time, the moon has influenced human beings since, well, since there have been humans. Long before there were electronic gadgets to tell us the time down to the millisecond humans used cycles to mark time. The cycle of the moon is easy to keep track of….just look up at night. No gadget required.

The cycle of the moon can also be a reminder to look at the other cycles in our life, the ups and downs, the dark times and the times when we are standing fully in our light.

The moon has phases because it orbits Earth, so the part we see illuminated changes as it goes around. The time is takes to do a new moon to new moon lunar cycle is 29.5 days.

The first phase is a new moon, or sometimes called dark moon. During this phase the moon is not visible from earth because the sun is not shining on the side of the moon that we can see. It is a great time to start a new project, focus on personal growth or set intentions and goals.

The next phase is the waxing moon, the time from new moon to full moon. Waxing means “growing” or expanding in illumination, we are seeing more of the moon every night. The waxing moon phase helps us grow the intentions we set during the new moon. It is a time for creation, expansion and putting work into what we want to create. This moon phase reminds us to keep expanding our vision and to fulfill our dreams.

The energy of a full moon is available for three days, the day before, day of and day after, with the strongest energy being on the actual day of the full moon. At the time of the full moon we can see everything. As the sun sets, the moon rises with the side facing the Earth fully exposed to sunlight. It can be breathtaking. Looking at a full moon makes me realize how vast the Universe really is and reminds me of my place in the great cycle. The full moon is a time of emotions, completion and releasing. It is a time for reflection and renewal, symbolized by the full moon Labyrinth walks held every month at the Peaceful Spirit Enrichment Center.

The last phase of the moon is waning, the time it takes to go from a full moon to a new moon. Waning means “shrinking” or decreasing in illumination, we are no longer blinded by the glow, instead we take a hard look at what is working and what is not. The waning moon is the perfect time to release limiting beliefs and behaviors, clear out the clutter and clean out your email. It is the time to examine, without judgment; how you have done on the goals and intentions you set at the last new moon.

And with grace and ease we start the cycle again. No matter what has happened during the last lunar cycle we can rest in the knowing that we will always get another chance. What will you create in the next cycle?

Here is a trick to figure out if the moon is waxing or waning. If the moon looks like the letter “C” it is a waning moon, it is getting darker on its way to a new moon. If it doesn’t look like a C or looks like a D then it is a waxing moon, growing brighter toward the full moon.