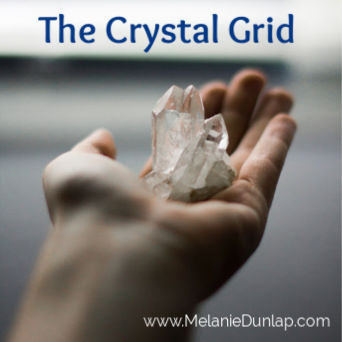 Lately crystal grids have been showing up in my life. I’m familiar with the concept of crystal grids but never really worked with one. Until recently.

I love crystals and have them all over the house. I know the names of most of them and the properties of about half of those from memory. Big pieces are my favorite, but pocket stones are easier to carry. I use crystals personally and in my wellness practice, but I am by no means an expert. Luckily, I know some ladies that are. Jeannie has never failed to identify anything I have asked her about and we call Stephanie “Rock Hound” for obvious reasons.

In all the years I have been working with energy and crystals I have never before felt called to work with crystal grids in such a personal way. The first nudge came from Stephanie when I first reached out to her about presenting a crystal workshop at this year’s AZ Goddess Conference. Within 24 hours she called me back and said that she had seen a vision of us putting a large crystal grid over the entire property and she wanted to make that vision a reality. I agreed immediately. We decided the install would happen on the full moon in October.

Not long after Stephanie’s vision a different friend brought me a gift. When I opened the bag, she explained its contents. First was a white, laminated piece of paper with an elaborate design printed on one side. Next were 5 plastic bags, each with different crystals in different amounts. Some bags only had one crystal while others had many more. There was also an essential oil spray to give the grid an extra boost.

I had no idea what to do with all the pieces, but I could feel a buzz of energy just holding them in my hand. She told me the design on the paper was sacred geometry and explained where to place each piece on the grid. It was designed to be an abundance grid.

A crystal grid is a special arrangement of crystals, stones and other natural objects for the purpose of manifesting your dreams, goals and intentions. The power of a crystal grid comes from the combined energies of the crystals you use, how you lay them out and the intentions you set. 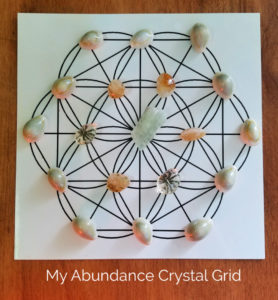 It took longer than I thought to find a good place to set up my new crystal grid.

It needed to be on a flat surface where it wouldn’t get bumped or disturbed. I found a place and carefully set up the grid according to the instructions. I added a few of my own personal touches to create a simple ceremony to activate the grid and sprayed abundance spray over everything…including me.

Then I quit paying attention to it.

I joked to my husband that my abundance grid was starting to work. Apparently, it was just getting warmed up.

The next day I won a grant from the Women’s Enterprise Foundation that will pay for most of the cost of publishing my book Uncertain Grace. I had been turned down for the same grant back in the spring. Had the crystal grid helped me get it this time?

I really did cover every room.

There was a smaller than expected group at the Labyrinth walk the next night. Even though the evening hadn’t been abundant in revenue, it had been abundant in meaningful connections. I had the opportunity to have some deep, rich conversations that night.

I don’t usually do things early the morning after a full moon walk but the next morning I was scheduled to have a phone call with the director of a certification program that I really wanted to attend. I contemplated cancelling the call. The tuition was so high there was no way I could afford it. I didn’t even know why I had agreed to the call. I felt sure it was going to be a sales call and I would be wasting my time and hers.

When my phone rang I almost didn’t answer. I was embarrassed about my current circumstances and didn’t want to spend energy fending off someone with a good sales script. I knew the program offered a payment plan and I was sure that would be the push. I had already looked at the information and I couldn’t do that either. There was no way I could afford this program.

My higher self told me to please answer the damn phone.

A woman’s voice greeted me, and I immediately felt an energy connection. There was no sales pitch, instead she asked me about myself, my work and why I was interested in the program. I spilled my guts. I told her about my business, our cancer journey, my new book and how I was struggling right now. I didn’t know why I was telling this stranger all my stuff but there it was.

The 30 minutes we had scheduled for the call came and went. She asked my what I could bring to the program and I asked her tough questions about what the program could offer me. I forgot about the cost of it and she never mentioned it. After about 45 minutes she said something that caught me off guard.

“In the program with a full ride scholarship. All you have to do is get yourself here” she replied.

I was speechless for a moment. Then as I tried to thank her I started to cry. Then she started to cry. Soon we were both laughing and getting excited. The training started in just 10 days.

Has the crystal grid been responsible for my recent abundance? I don’t know for certain. What I do know for certain is that it feels like a lot of abundance has been flowing my way lately. I know that having the crystal grid has made me more aware of that abundance and has given me a way to focus on the positive things that are happening and not dwell on the other stuff. It makes me smile when I see it and looks beautiful sitting on the table.

The true purpose of a crystal grid is to direct energy for a desired outcome.  Ever since I put mine together the energy has been headed in the right direction. I don’t believe the grid is solely responsible but it sure hasn’t hurt.

Have you ever worked with a crystal grid? Share your experiences in the comments below!