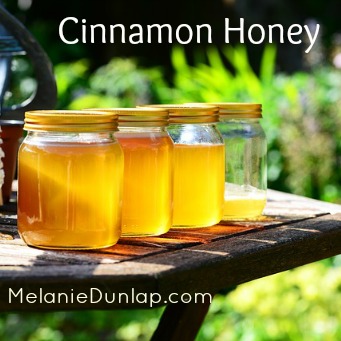 Sometimes the simplest things are the best. Take cinnamon honey for example. Simple to make, tastes great and filled with a host of health benefits. Give as a gift or keep your own natural medicine cabinet stocked. Use cinnamon honey in your favorite herbal tea. Replace regular honey with this flavorful version in recipes.

Check out this video to learn a few of the health benefits and simple instructions for making cinnamon honey!

Use your cinnamon honey in this Poached Pears in Honey, Cinnamon and Ginger Sauce recipe!

In a saucepan large enough to hold all the pears, combine the wine, simple syrup, cinnamon honey, and ginger. Scrape in the seeds from the vanilla bean and add the bean and seeds to the saucepan. Bring the mixture to a simmer, stirring occasionally, until the honey has melted. Add the pears and simmer for 15 to 20 minutes, turning occasionally, until the pears are tender. Remove the pears from the liquid and allow to cool.

Continue to simmer the liquid until it thickens and is reduced by half, about 15 to 20 minutes. Cool to room temperature. Remove the vanilla bean and discard.

Place each pear on a small serving plate with a scoop of vanilla ice cream. Drizzle with the honey, ginger and cinnamon syrup. Serve immediately.

Simple Syrup: In a small saucepan, combine the sugar and water over medium heat. Bring to a boil, reduce heat, and simmer for 5 minutes, stirring occasionally, until the sugar has dissolved. Remove the pan from the heat and allow the syrup to cool.