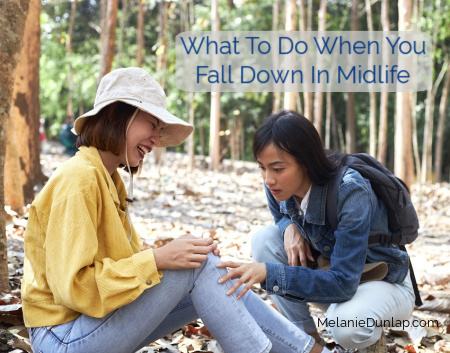 That makes it sound gentle.

What I really did was a meme worthy, trip over my feet, try to recover, think for a moment that I had it, start to go down, flap my arms in the air like one of those blow-up advertisements at the car dealership, bounce off the grocery cart, and land hard on my hands and knees.

And probably hilarious had it not been so real.

That morning was supposed to be a quick run into the grocery store before starting work. I only had four items to pick up. There was rain and a little fog that morning, so Tom had gone with me. That would turn out to be a good decision.

I’m still not sure exactly what happened. I was headed to the self-checkout when I saw a cashier open and turned left to check out with her because she looked bored. She had no idea how exciting her day was about to become.

It scared her to death when I fell. She rushed over to me dodging my purse and the glasses that had been flung off my head in the narrow checkout aisle. Like me, she was a woman in midlife, and she expected the worst.

I had to sit there for a moment because the room was spinning a little bit and I was in so much pain. The cashier kept asking if I was alright and I kept telling her I was.

Despite the pain I picked up my belongings and got myself upright. My right knee was screaming in agony and didn’t like having weight put on it. I smiled at the cashier and wondered why it was taking so long to ring up my items. It really didn’t take that long but it felt like an eternity to me.

When I exited the store Tom pulled to the curb to pick me up. I was nearly in tears when I got in the car and explained to him what had happened. I pulled up my pant leg and a raspberry the size of a nickel was already there but no bleeding.

My knee was throbbing, and I was scared. My right knee has been known to give me trouble over the years and is my weakest. I really wanted to cry.

An additional frustration was that I had planned to start painting my meditation room that day. There was no way I would be able to stand and do that. Now I was in pain and pissed off.

As Tom pulled us out of the parking lot, I began to get control of my breathing. I needed to get my wits about me if I was going to deal with this.

Closing my eyes I let my intuition and knowledge take over. That’s when I realized that my hands were already softly holding my knee, so I slipped into energy mode and let Reiki flow. The knee was giving off heat and the energy was stagnant. I focused on moving the energy and releasing pain.

Energy work was all I could do until we arrived home, but once we got there I added more to the treatment. The first thing I did was cover my knee in Saint John’s Wort Oil, avoiding the raspberry. This is my go-to oil for reducing the likelihood of bruising and the light rubbing also helped speed healing.

Additional tools were Pain Relief Plus Tincture, elevation, icing, stretching and turmeric. I listened to my body, cancelled everything that I was going to do that day (not like I had a choice) and kept alternating the healing modalities throughout the day.

By afternoon I was surprised that there was no bruising. None. There was very little swelling, and I was able to move it. I went to bed feeling hopeful.

The next morning I was amazed at how well I was doing. Still no bruising, able to walk and stand with occasional weakness. I continued the pain tincture, turmeric and Saint John’s Wort oil throughout the day.

And I was able to paint! That’s right…the day after I fell, I was able to be on it and painting a room. I will admit I wasn’t moving normal or at full speed, but I was mobile.

Two days after the fall I was pretty much back to normal and had finished painting the meditation room. I never had any bruising and after the first day I never had anymore swelling. After the third day I was pain free and back to full strength. The worst part was the raspberry, my pants would rub against it and cause irritation.

And to share tips with you on how to survive a fall. Once you are in midlife the “F” word becomes scarier.

What To Do When You Fall Down

Do a Self-assessment: While you are still on the ground check yourself out. Are you bleeding? What hurts? Can you move everything you are normally able to move?

Plan your Next Move: Based on your self-assessment decide what needs to be done next. If you are hurt badly have someone call 911. If you are bleeding, hold pressure on the wound. If you are able to get up without further injury, do that. Let someone help you up if possible.

Treat the Wound: If you have broken the skin or were bleeding you need to clean and dress the wound. As a natural health practitioner I always recommend using Herbal Healing Salve on any skin injury. I used it on my raspberry.

Manage the Energy: You don’t have to be a trained energy worker to do this, the most important part is your intention. Put your hands on or near the injured part. Breathe mindfully and intend to let your energy flow. You may feel some heat coming from the area, this is a sign of injury and the body’s process of responding to it. It’s perfectly normal at this point. You may also feel a slight resistance or unnatural stillness in the area. That is a result of energy that has gotten stuck in the injury. Think about the energy starting to move, don’t worry about doing it right. If you are doing it, you are doing it right.

Oil the Area: This is my secret weapon for avoiding a bruise and healing quickly, Saint John’s Wort oil. Rub it all over the affected area, avoiding any open wounds. Make sure to go out further than it hurts. My knee was the pain point, but I put it all the way down my shin, halfway up my thigh and on the other leg as well.

Manage the Pain: Now is not the time to ignore your pain. Use whatever pain therapy works best for you. I use and recommend Pain Relief Plus Tincture. Continue to take as necessary.

Ice: If you see visible swelling then icing the area is recommended. Too much icing can actually cause damage, so I recommend ten minutes with ice then ten minutes without. Make sure the ice is wrapped in a cloth to prevent any nerve or skin damage.

Rest: This is one of the most important parts of healing and the one that is most often ignored. You have to give your body time to do the work of healing itself. That may be a few hours or days depending on the injury. Pay attention to how you feel and be honest with yourself. Resting doesn’t mean that you can’t do anything, it means that you need to curtail your activities to a point that meets your injury. You will actually get back to normal quicker.

Midlife doesn’t have to be a scary time. Being prepared and knowing how to respond when the unexpected happens gives you power. Trust yourself and you can bounce back from anything!