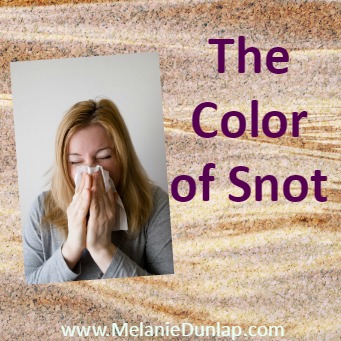 Kids have no trouble looking at their own snot. As adults we don’t want to be caught looking in the tissue after we have blown a big wad out of our nose.

But you should look.

In a healthy state, mucus is a mixture of proteins, antibodies and dissolved salts in a thin fluid. Its purpose is to keep the nasal passages wet and to add moisture to the dry air we breathe in.

You don’t really think about snot until it starts to thicken. Suddenly you can feel it dripping down the back of your throat or your nose feels very full. You sneeze and blow trying to get the irritation to stop. What you blow into that tissue can give huge insight into what is going on in your body.

Mucus, aka snot, comes in many colors, each color an indicator of specific actions being taken by your body to bring it back into balance. Clear mucus is a good sign. White mucus suggests congestion. Swollen, inflamed tissues cause mucus to lose moisture and become thick and cloudy. This is a first stage warning…time to boost the immunity.

Yellow mucus means the illness is progressing and the white blood cells have been called in to help, dying off in large numbers they make the mucus thick and tinged yellow. If your snot progresses to green it means the battle is really on, the mass of dying white blood cells include a barrage of neutrophils that contain a greenish-colored enzyme, giving the mucus a green color.

Despite what you might have heard, green snot does not automatically mean you need a course of antibiotics. In fact most infections that generate copious amounts of mucus are viral infections. Antibiotics don’t work on viral infections. You may feel poorly for a few weeks but a viral infection will eventually clear up by itself. A viral sinus infection, sinusitis, is most often accompanied by a green or yellow mucus, pain around the cheeks, eyes or forehead. Simple home remedies, such as a neti pot, help relieve the symptoms of sinusitis and other mucus causing infections. Reoccurring infections that linger should be discussed with your natural healthcare provider.

Other colors of mucus can include pink or red, a sign of blood. A small amount of blood comes from the nasal tissue being broken, either by excessive dryness, irritation or impact. Inhaled contaminants such as dirt or sawdust look brown. Black mucus means get your butt to the doctor. A sign of serious fungal infection, black is usually only seen in people with a compromised immune system.

So the next time you grab a tissue and blow be sure to sneak a peek!