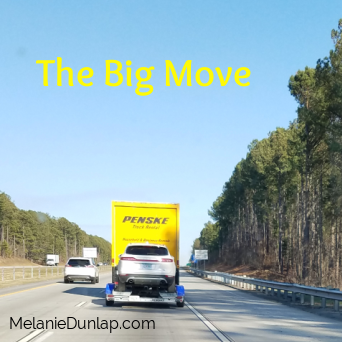 It was the last thing to do, smudge the house and release the protections I had put around the house so many years ago.

My footsteps echoed as I walked through the house. As hard as I tried, I couldn’t keep the tears from falling. Each room held so many memories and I was overwhelmed with gratitude to the house and all those that had gone through it.

I closed and locked the door one last time. Our crazy caravan was ready to move.

Too big to fit in the driveway, Tom was making a pre-trip check of the 26’ Penske truck we had loaded the day before. It was the biggest truck they had, and we still couldn’t fit everything we had intended to take. It is amazing how much stuff you can accumulate when you live in a house for 15 years.

He was pulling our car on a trailer behind the Penske truck. My beautiful car with low miles and more amenities than you can shake a stick at was being towed all the way to Georgia. Instead of the luxury ride I was expecting to take, I was driving our fifteen year old pickup truck for the trip.

As much as I was disappointed at not being able to drive the car, I was equally grateful for the setup that Tom had made for us in the pickup. While he had to travel alone in the big truck, I had company. Our two cats, Wyatt and Virgil were embarking on their first adventure with us.

It was the part we worried the most about. If one of them got loose, we might never catch him or worse he might get hurt. They were the reason I wasn’t driving the car.

When we moved to Arizona nineteen years ago, we had brought three cats with us, so we had some experience. The trick with moving indoor cats across country is that they go in the carrier when you leave and don’t come out until you arrive at your destination.

That means they have to eat, pee and be able to move around in the carrier.

Tom had really outdone himself this time. To get the carrier in he had to remove the passenger and middle seat from the pickup. He then had rigged up a litter box that extended out of the carrier a little bit to give them as much room as possible. I think he used half a roll of duct tape.

Then because he is so smart and thinks of those sorts of things…he built me a custom console to use for the trip. It was complete with arm rest, a cup holder and one of my plastic storage containers modified (meaning cut to fit and no longer useable for anything else) as a place for munchies and my walkie talkie.

Getting the cats in the carrier had gone easier than we hoped so now everyone was ready to go. With a check of the walkie talkies and one last look around we got in the trucks and headed out just after daylight.

I cried as we pulled out. Not as much as I expected to but that might have been because of the howling going on beside me. The initial shock of being put in the carrier had been replaced with indignation at being unable to get out.

We had hoped to leave much earlier than we did but instead we left in time to hit some Phoenix rush hour traffic. Once we got through the heavy traffic, we took deep breaths and settled in for a long haul.

Tom had been dutifully watching the weather and decided that taking Interstate 10 gave us the least chance of having to deal with ice or snow. Just the week before Texas had experienced deadly winter weather and we wanted to avoid driving in anything like that. There was also the added stress of leaving the cats in the truck overnight when temperatures could be near freezing.

We quickly found out that the large truck we rented had a top speed of 70 mph and went up hills at 40 mph. What should have been a two day trip turned into three very long days. But Tom had chosen wisely, we had sunny skies and warm temperatures the whole way.

By day three people and cats were starting to get cranky. Virgil had decided that he had been contained long enough and was determined to find a way out. He howled and tried to push his way out the top of the carrier, when that didn’t work, he dug at the corners and eventually the duct tape. He was in distress. 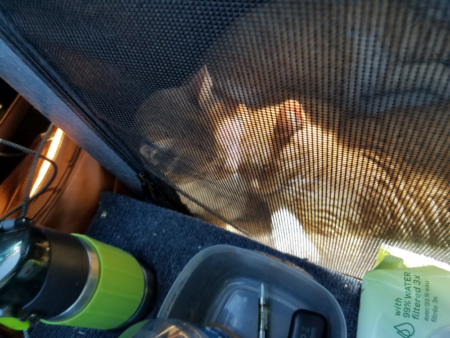 Just when I though we were going to have to pull over the most amazing thing happened, his brother Wyatt actually put his arm around Virgil and calmed him down. He got Virgil to lay down beside him and they went to sleep snuggled together for comfort.

That third day was the longest, fourteen hours we drove that day. It was dark when we finally arrived at our new home in Dahlonega, Georgia. There was a small, socially distanced welcoming committee that was waiting on the front porch when we arrived.

I cried when I got out of the truck, partly from happiness, mostly from exhaustion. We expressed gratitude to our family and friends that were there to greet us and then asked them to leave. All we wanted was to get the cats out of the truck and go to bed. Fortunately, no one was offended.

It has been three weeks now since we arrived. The cats are very happy with their new surroundings, there are more birds than they have ever seen before and they are still trying to understand squirrels. The new house has hardwood floors, and they love to run through the house sliding around corners and twisting up the rugs. 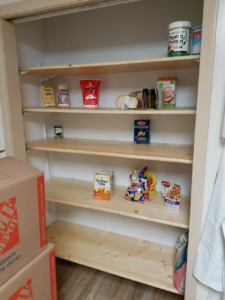 Tom has a beautiful new workshop that is literally three steps from the house, he counted. Just forty eight hours after getting here he had already built and installed five shelves for the kitchen pantry. The next week he went and visited a local sawmill where he picked out the prettiest pieces of walnut he could find. That wood is now a beautiful cabinet.

The day after we arrived, I went out into the yard and hugged a tree, okay more than one. The grass in the front yard hadn’t yet been mowed and I squealed with delight at all the healing plants I saw there. Bee balm, chickweed, clover and wild onions all waved back at me as I ran around pointing them out. Some of my very first herb friends are once again growing all around me! 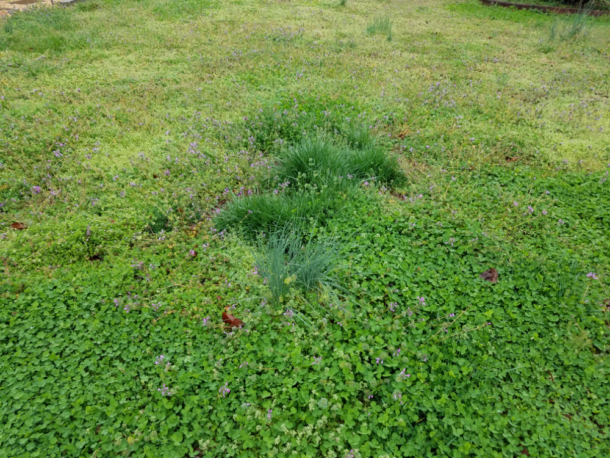