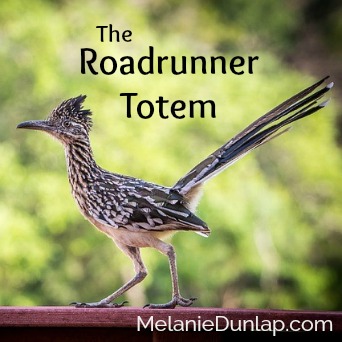 There’s a song from the 1970s with a line that says “sign, sign, everywhere a sign”. You may be familiar with the song. But are you familiar with all the ways that signs are showing up in your life?

One way that signs can show up in your life is through the animals that you see. Known as animal totems, they were very meaningful for our ancestors. A totem is a spirit being or sacred object that is connected to an individual. In some traditions children are given animal totems at birth.

But you don’t have to be given an animal totem at birth for them to have meaning for you. Animals sometimes show up as messengers. Seeing an animal that you don’t normally see, repeatedly seeing a specific animal or finding signs of an animal such as feathers. An animal may appear in your dreams.

Recently my animal totem was a live roadrunner.

He would show up at my office door every morning, sometimes stopping to peak in the window. Seeing a roadrunner is rare at best, having one visit me every morning got my attention.

His antics made it seem like he was trying to get my attention. To be honest I don’t know enough about roadrunners to know if it was a he or she, but the energy felt like a male.

It was summer in the desert and he was trying to stay cool. As he stood outside my office door he would drop his wings as if to catch any breeze that might come along and open his beak like he was panting. After making sure the coast was clear he would work his way over to the birdbath for a drink.

He became such a regular that I was able to get pictures and even video. That’s when I thought maybe I should find out more about roadrunner.

Probably the most famous bird of the desert Southwest, the roadrunner was born to run. With top speeds of up to 20 mph, they run nearly parallel to the ground and use their long tails as a rudder. Even with a wingspan of 19 inches they prefer running over flying.

The roadrunner’s diet includes insects, birds, lizards, snakes, eggs, fruits and seeds. Mostly things it can find on the ground. Although they have been known to fly straight up to capture birds smaller than themselves in midair. They can eat poisonous prey with no ill effect, but they make sure to swallow horned lizards headfirst with the horns pointed away from vital organs.

Roadrunners mate for life and share responsibilities. They work together to build their nest, with the male collecting the materials and the female building it. The female lays the eggs, but the male is in charge of incubating them. Both parents care for the chicks until they are about 40 days old. Roadrunners can live up to eight years.

If you look at roadrunner tracks, you can’t tell whether it’s going forward or backward. Called zygodactylism, it is when two toes face forward and two face backward creating an “x” pattern footprint. The design is said to confuse evil spirits.

But this bird didn’t show up outside my office just for me to get a natural science lesson. This bird came as a messenger.

As a sign the roadrunner tells us we can shift priorities and plans easily and swiftly but cautions us not to act so quickly that we end up acting hastily. It can mean an end to delays, setbacks and even procrastination. It is a time for things to move forward in your life.

People affected by roadrunner energy have challenging relationships with their loved ones. They’re usually involved in several projects at once and their mind is always thinking and analyzing. When they try to communicate their thoughts to others they have to remind themselves to slow down to be understood.

The roadrunner teaches mental agility and how to think on your feet, helping you shift direction quickly and adapt to the new course easily. It also reminds us to use our energy in a more efficient way, to awaken our senses and plan for a brighter future. Also, be willing to laugh at yourself and not take your quirks and idiosyncrasies too seriously.

You don’t have to wait for a roadrunner to show up outside of your door. You can call on the energy of the roadrunner when you need mental dexterity and quick reflexes. When you need to enjoy life more fully or need a good laugh. Roadrunner energy also helps you make self-care a priority without sacrificing your care of others.

I got the message and after about a week he stopped coming by. He made a big impression on me, letting me get him on video and prompting me to write this blog. In looking back on the timing of his visit I also realized that was when my book project started moving forward again. I am continuing to work with the roadrunner energy.

Is there an animal totem trying to get your attention? Watch for the signs.

Share your animal totem encounters in the comments below.