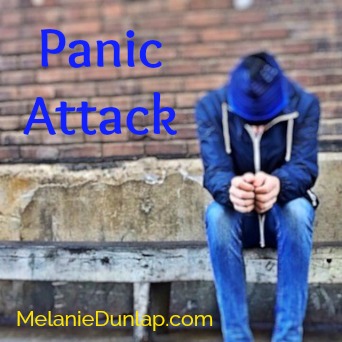 There were some warning signs. They started about a week or so before. It was subtle at first, getting frustrated easily, annoyed at trivial things, slowly becoming more physical, tightening of muscles, difficulty breathing. It escalated to depression and full-blown fatigue.

The energy was working its way through all my dimensions. I was aware it was happening but felt powerless to stop it. Then the unthinkable happened.

I had a panic attack.

It was the perfect storm. Not only had the voice in my head been especially nasty but I had also been physically ill. The energy took on a life of its own and I couldn’t get ahead of it.

It was a week night and I was in downtown Phoenix for an event that I had been looking forward to for a while. Circumstances had worked out so that I had to attend by myself. I was completely depressed and devaluing myself the entire drive to the venue.

Fortunately, it was an empowering event and as soon as I arrived the hostess was so gracious and friendly that my spirits were uplifted immediately. The energy of others has a profound effect on us humans. As the room filled with positive people I was able to immerse myself in that energy and use it to quiet the voices in my head.

Everything went smoothly for 4 ½ hours. Exhaustion set in and it had gotten hot inside the building. I made my polite goodbyes, heading to the truck for the long ride home. It had gotten later than I expected.

I am not unfamiliar with Phoenix, I worked downtown for a few years, but that was a long time ago and the train system had been installed all over town since I used to come here. Things looked drastically different than I remembered.

Throw in the fact that I am directionally challenged, and you get the perfect storm.

The first turn out of the parking lot was correct. There were a lot of cars on the road and I turned where I thought I should. Before I knew what happened I was lost. The more I drove the more my energy got out of control and I could feel myself losing it in all four dimensions.

It started to show in my physical body, my left hand was shaking uncontrollably, I was trying to shake off the excess energy to keep it from building. I was lost downtown for about 20 minutes. No matter how hard I tried I couldn’t figure out how to get home. I tried voice commanding the gps on my phone but it wouldn’t talk to me and I was too scared to look away from the road to the phone.

I accidentally made a u-turn in front of 3 lanes of traffic, I thought I had a green arrow. When I realized what happened I started to cry and have trouble breathing. I was scared.

Then the absolute panic set in. I screamed at the top of my lungs. A guttural scream of fear and energy release. I was still panicking but the scream made me take a deep breath and my head cleared for just a moment.

I tried one more voice command to my phone. “Call Tom” I cried into the phone. “Calling Tom” came the electronic voice back to me. It worked.

His voice was cheerful when he answered the phone. Immediately I began to scream and cry into the phone. “I’m lost, I’m scared, and I can’t find my way home!” He couldn’t understand the words completely, but he understood the energy at once. The cheerful tone was gone, he was all business.

“Look around, read me the signs. What lane are you in? How fast are you going? Move over to the right. Get off at the exit. What do you see?” His words gave me a focus, they engaged the mental dimension of my energy. I was still totally hysterical, but I could follow his direction.

He got me into a parking lot by sheer will.

I sat there shaking, crying and unable to breathe. I was not in control of my energy at all. All the stress, worry and fear had overwhelmed me. Getting lost had been over the limit of what I could handle.

It took ten minutes for me to regain control. Tom kept talking to me, helping me to calm down. He offered to come get me, but we agreed I wouldn’t move until I had my shit back together. I just sat in the parking lot until I felt like myself again.

He talked to me all the way home. When I would tell him where I was he would give me a run down of what was there or what the next exit would be. Together we got me home safely. I was shaken with a tear streaked face, but I was safe. He was visibly relieved.

What is a panic attack?

If you’ve ever experienced a sudden surge of overwhelming anxiety and fear, then you’re familiar with the feeling of having a panic attack. Your heart pounds, you can’t breathe, and you may even feel like you’re dying or going crazy.

The signs and symptoms of a panic attack develop abruptly and usually reach their peak within 10 minutes. They rarely last more than an hour, with most ending within 20 to 30 minutes. Panic attacks can happen anywhere and at any time.

~ Learn how to control your breathing. Hyperventilation brings on many sensations such as lightheadedness and tightness of the chest that occur during a panic attack. Deep breathing, on the other hand, can relieve the symptoms of panic.

~ Practice relaxation techniques. Activities such as yoga, meditation, and connecting with nature.

~ Connect face-to-face with family and friends. Symptoms of anxiety can become worse when you feel isolated, so reach out to people who care about you on a regular basis.

~ Get enough sleep. Insufficient or poor-quality sleep can make anxiety worse, so try to get seven to nine hours of restful sleep a night.