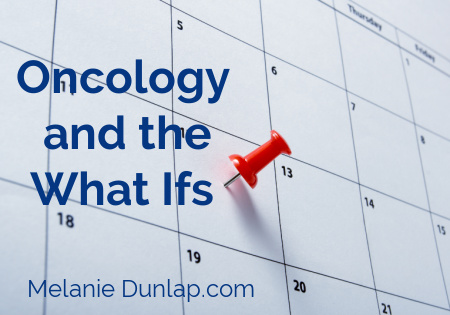 Every week I put my schedule on a board in the kitchen so my husband knows what my week looks like. As an entrepreneur no two weeks, or even days for that matter, look the same.

When I got to Thursday of that week my hand began to shake. I held the pen poised to write the next appointment on the calendar when so many memories came flooding back. It felt hard to breathe.

It had been ten months and nine days since the last time I had to do this. Yes, I was supposed to do it sooner but I put it off.

I had an appointment with the oncologist.

There was nothing wrong, that I knew of. Although I didn’t know anything was wrong when I got diagnosed.

That thought made it hard to breathe again.

I steadied my hand and wrote on the board. I did chicken out a little…I just wrote doc appointment. It was only Sunday, and I didn’t want to spend my whole week looking at the word oncologist every time I passed by.

As much as I tried not to think about that upcoming appointment, I couldn’t help it. I told myself there was nothing to worry about….but I worried anyway. And I second guessed every decision I had made since the last time I saw an oncologist.

I’m not taking the aromatase inhibitor medications they wanted me to take. I had tried three different prescriptions and the side effects for all of them had been unbearable. Instead, I did my own research and take a natural supplement that does the same thing. The occasional hot flashes tell me that it is working without the harsh chemicals, terrible joint pain, sleepless nights and depression.

But what if I was wrong? What if that allowed the cancer to come back?

I hadn’t seen an oncologist in almost a year. They told me not to go longer than three months before coming back. What if I had waited too long?

My nutrition hasn’t been as good as it could have lately. I’ve eaten sugar. I know cancer loves sugar. What if that let it take hold again?

The meditation and stress reduction work that I had been doing during treatment had fallen by the wayside. I’m back to working long hours and feeling overwhelmed. What if that has wrecked my immune system and cancer had snuck back in?

Not to mention this was a new oncologist that I had never seen before. I had moved halfway across the country since my treatment and was having to start with a new doctor. What if I didn’t like him? What if he didn’t know enough about my special circumstances?

All the what ifs were worrying me into a state of paralysis.

I reminded myself to breathe and even spent a little time meditating to calm my nerves. During my meditation I connected with my inner healer and aside from the damage that had been caused by multiple surgeries, a breast infection, life threatening allergic reactions, gallons of deadly chemicals pumped into me, radiation treatments, months of unbearable pain, foreign objects implanted in my body and a year of chemotherapy…I was doing okay.

The day of my appointment arrived. It was an afternoon appointment, so I was able to go about my regular day until then. It was a Thursday, that meant I had a 7:30am Rotary meeting. I’m a morning person so I actually enjoy early meetings and usually feel very productive when my day starts that early.

Obviously that day was going to be different.

I hadn’t slept well, and I was up before my alarm. In the shower my hands were shaking so much that I struggled to get the shampoo open. Finally, I just stood there and let the hot water run down over me to soothe my nerves.

My usual routine is to get everything ready the night before so I can just pick up my bag and go in the morning. I had done that the night before but apparently was preoccupied and didn’t get everything. I had made a couple of trips out to the car already when my husband asked me “Are you alright?” I grabbed my bag and snapped “No! I have an oncologist appointment today.” I immediately felt bad for snapping at him, but I was on edge. He gave me a hug and I set out for my meeting.

It is always an hour-long meeting but that day it seemed to go by quicker than usual. I was too preoccupied to be able to stay afterwards and talk with anyone. I wanted to stay because I wanted to avoid thinking about the appointment. Instead, I hurried out with only the shortest goodbyes.

All too soon we were in the car on the way to the oncologist office.

It is amazing how vividly memories can come flooding back. Even though it was an entirely different office and new doctor, the scenery was the same. Women wearing scarves to try and keep their heads warm after their hair fell out, the recognizable terror of the newly diagnosed, the unsteady shuffle of patients coming out of the infusion room and the palpable energy of fear.

I froze in my chair when the nurse called my name. Lovingly, my husband took my hand and walked me to the exam room. I’m not sure which one of us was shaking more.

The nurse did her thing and then we were left to wait for the doctor. I considered bolting out the door before the doctor could arrive, not the first time I had considered that, but I didn’t.

I loved this doctor. He is young, smart and took the time to talk to me. We went over my records, asked about everything I had been through and what was going on now. He asked questions and more importantly he listened to the answers. He did a breast exam, was a little surprised by how much pain I still have there, then told me I could get dressed.

He came in, sat on the stool, looked me straight in the eyes and said, “You’re good.” They weren’t the most profound words, but they were enough to make me cry.

I had waited ten months and nine days to hear an oncologist say that to me.

He told me that the year and a half I had spent in treatment was the best thing I could have done. The treatments had given me just a 5% chance of recurrence. I still have to have my mammograms and see him once a year just to stay his patient but that is it.

I am cancer free!

He stood up, shook my hand and told me to go live my life. And that’s exactly what I’m going to do.

13 thoughts on “Oncology and the What Ifs”