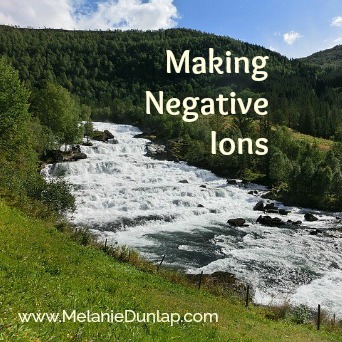 The loud ticking sound and lack of air movement made it obvious that our old tower fan needed to be replaced. Fans get a lot of use in the desert and this one was no exception, it had blown for years.

What should have been a simple task of replacing it, turned into a hunt worthy of Artemis! Space concerns meant that it needed to be a slim tower. The first 3 stores had only short boxy fans, the final store had only 1 option but it would work.

Unpacking the fan at home I noticed an extra button on the top with the word ION written on it, pushing it made a blue light come on. I briefly wondered why it would be on the fan and how to use it, then I just stood in front of it enjoying the breeze.

But what are ions and why are they in my fan?

The air we breathe is full of positive and negative ions. Negative ions are oxygen with an extra electron attached. They are produced using water molecules and are abundant near fresh, flowing water such as rivers, streams, oceans and waterfalls.

The process of turning normal air molecules into negative ions is called ionization, and it occurs naturally when air is under the influence of energy sources such as sunshine, lightning or waterfalls. Negative ions are highest before, during and after a storm.

Negative ions are plentiful in natural settings but can be extremely low indoors. Recirculated air conditioning, lack of ventilation and closed, moving vehicles cause a depletion of negative ions. The lack of negative ions and their water molecules is often why we get dry skin and thirsty when confined in a stuffy office all day.

Marketed as a way to clean indoor air, negative ions can be created by a machine and bond with the opposite charge of dust and impurities in the air. These clumps of particles then become heavy enough so that gravity can pull them down to the floor, where they can be vacuumed up, rather than staying in suspension where they can be breathed in and cause allergic reactions.

Though doctors and scientists cannot say exactly what negative ions do for humans and animals, many experts agree that at the very least, negative ions can help increase energy and improve mood. A professor at UC Berkeley found that negative ions affect serotonin levels in the brain.

While it may be true that there is some health benefit from increasing negative ions indoors, don’t overestimate their power. A quick scan of the internet would have you believe that negative ions can cure everything from depression to cancer. An overpriced machine filling your home with negative ions will not cure disease, but it can be a useful part of a holistic wellness plan.

A more natural way to increase the level of negative ions in your home or office is with a water fountain. Houseplants are also a great way to improve your indoor air quality. Not only do they add oxygen but they also absorb harmful chemicals from the air. Very beautiful to look at, Himalayan crystal salt lamps only produce very small amounts of negative ions.

That brings me back to my fan. Does the ION button do anything?

I can’t be sure. Most of the time I forget to turn it on anyway.