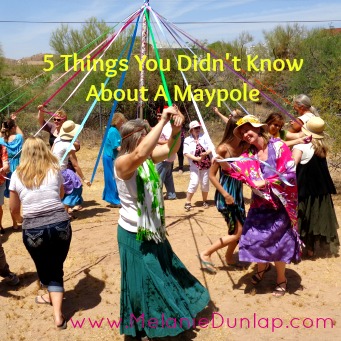 1. That it’s even a thing. The origins of the maypole come from a time when tree spirits were worshiped and trees were seen as symbol of vitality and fertility of nature. The first maypoles were tall, slender birch trees which had all but a few branches at the top stripped off. The top branches were then decorated with garlands of flowers. The first Maypole dancing can be traced back to Germanic pagan fertility rituals where the pole represented the phallus being planted into mother earth’s womb to bring forth new life. The sexual symbolism of the maypole and all the immoral revelry that went along with it led the Puritans to out-law the maypole custom in 1644. However, this prohibition was soon repealed after the restoration of Charles II in 1660.

2. It’s not dirty dancing: Today’s maypole dance, with its colorful ribbons and dancers of all ages comes from a traditional, artistic dance popular in Italy and France in the 18th century. It was eventually seen by larger audiences in London. An English teacher training school adopted the maypole dance and it spread across England. The dance became a part of the physical education curriculum for girls and was popular in elementary schools in both England and the US until the mid 1950s.

3. You don’t need rhythm to dance it:

4. It helps reduce stress: Your body loves movement, ceremony and good company. Dancing around our maypole produces lots of smiles, laughter and light heartedness. Those positive emotions coupled with the exercise helps your body produce more dopamine and endorphins, reducing the long term effects of stress.

5. It pairs well with World Labyrinth Day: The maypole is a symbol of the 1st day of May known as May Day. At the Peaceful Spirit Enrichment Center we dance the maypole on the 1st Saturday of May so that we can also celebrate World Labyrinth Day. Started in 2009, World Labyrinth Day was created by the Labyrinth Society to create a wave of peaceful energy washing across the times zones. Everyone is encouraged to “Walk as One at 1” in the afternoon. If you can’t join us here at the Center you can find a Labyrinth near you by checking the World Wide Labyrinth Locator.