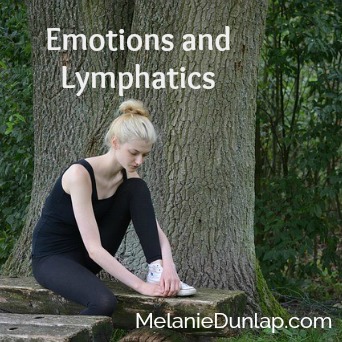 Are you feeling anxious, depressed or lack energy? The key to changing those feelings may lie in your lymphatic system.

If the lymphatic system ceases to function the human body will die within 24 hours. The lymphatic system is like the body’s drainage system, it removes waste products and identifies and destroys potentially harmful organisms in the body. It maintains the fluid balance in the body and aids the immune system.

The lymphatic vessels are part of the circulatory system and in most of the body they run alongside blood vessels. As the blood circulates, a small amount of blood plasma leaks out and carries nutrients to the tissue cells and becomes the extracellular fluid…a fancy way of saying fluid around the cells. Most of this fluid seeps immediately back into the bloodstream but a small amount is left behind.

The lymphatic system takes up this left behind fluid, now called lymph, and other debris. There are between 600-700 lymph nodes in your body. Those nodes contain immune system cells that act like little TSA agents. They make sure the fluid isn’t carrying any unapproved materials such as bacteria, viruses or fungus. The lymph nodes filter the fluid and if an invader is detected they destroy it and create antibodies that are released into the system. Those antibodies act like a wanted poster…they tell the body what the invader looks like and how to destroy it.

Without these checkpoints, infection and disease would circulate freely throughout the body’s organs and tissues. The fluid inside the lymph nodes contains white blood cells called lymphocytes. When those lymphocytes are fighting an infection the lymph nodes can swell. Even though we refer to them as swollen glands, they are actually swollen lymph nodes that you can sometimes feel in your neck when you are sick.

In addition to the lymph vessels and nodes, the system also includes the tonsils, spleen and thymus gland. Unlike the circulatory system the lymphatic system does not have a pump to push the fluid through the system, instead it relies on muscle movement. Blood flows throughout the body in a continuous loop, lymph flows in only one direction, upward toward the neck.

What does that have to do with feeling anxious, depressed or lacking energy?

Until 2015 the scientific community believed that the brain and central nervous system were devoid of lymph. In contrast Ayurvedic healing held the belief that the brain had drainage channels at the top of the skull. A research study by the National Institute of Health used MRI scans to discover the brain’s lymph drainage system is right where traditional healers said it was.

The lymph system is designed to rid the body of toxins and destroy invaders. When it gets overwhelmed the result is a sluggish feeling and stagnant energy. If our brains are not draining toxins efficiently it can cause anxiety, depression and brain fog.

Lymph fluid may only flow in one direction in the body, but the influence of the lymph system and our emotions is a two-way street. Failing to deal with strong emotions such as worry, anger or grief can cause congestion and inflammation. Stagnant emotions can cause a toxic buildup that shows up as painful joints, weight gain, recurrent infections and overall poor health.

Watch this video to learn about skin brushing:

If your lymphatic system is showing symptoms of toxicity now is the time to practice self-care. Better yet, don’t wait for symptoms, keeping your lymph system healthy is a crucial part of any long-term wellness plan. Practice the tips above and see Dr. Melanie about creating a personalized plan that fits your lifestyle.