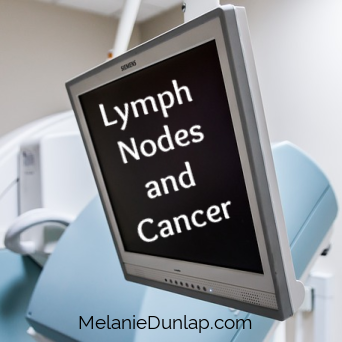 It was two days after my breast cancer surgery, and I was waiting for the surgeon to call me with the pathology results. She had hoped to get them by Friday, if not I would have to wait until Monday.

I did not want to wait.

The phone did finally ring on Friday and the news was good. My lumpectomy had been successful, and my lymph nodes were clear.

I had been holding my breath about the lymph nodes. Yes, the lumpectomy was important but knowing what was going on in my lymph nodes felt more important because this was a recurrence.

What is a lymph node?

The lymph nodes are small in size, about the size of a pea or kidney bean, but their job is big. Along with a network of organs, ducts and lymph vessels known collectively as the lymphatic system, the lymph nodes act as check points to filter out harmful germs. They also contain immune cells that destroy unwanted bacteria and other substances that are carried in by the lymph fluid.

The lymphatic system is so important to the human body that if it were to stop functioning, we would die within 24 hours.

Cancer starts in one area and then uses the lymphatic system as its transport to the rest of the body. That spread is called metastasis. Even though we have good data to show where a cancer is likely to spread depending on where it started, once it is in the lymphatic system it can go wherever it wants.

If a lymph node encounters a cancer cell its job is to destroy that cell. But if our immune system isn’t operating at peak performance then the lymph nodes essentially have one hand tied behind their backs during the fight. If they lose the fight, then cancer cells hop on the transport and go looking for a new neighborhood.

There are hundreds of lymph nodes in the body. Fortunately science has been able to trace lymph drainage so doctors know which nodes to check depending on tumor location.

Knowing the status of lymph nodes can play a big part in treatment decisions. The only way to know for sure if a lymph node has been in contact with cancer cells is to remove it and have it tested.

It may sound barbaric to us now, but there was a time that all the lymph nodes in an area would be taken out and examined for metastasis. That creates a tremendous, life-long burden on the rest of the lymph system. If the body can’t clear the lymph fluid sufficiently it will back up and cause swelling known as lymphedema.

In my case they used both. When they use the blue dye it causes you to pee blue for the next day or two. I felt like a smurf.

How to Support Your Lymph System

Don’t wait for a cancer scare to show some love to your lymph system. A healthy system is vital for all of the body’s functions. It not only removes waste materials but also absorbs nutrients and delivers them to the blood. There are even lymph vessels in your small intestine.

Use these simple tools to keep your lymph system healthy and vital.

Movement: Blood gets pumped by the heart, but the lymph system needs daily physical exercise to keep it from getting stagnant. Exercise, dancing, walking or rebounding on a mini trampoline all increase lymph flow.

Hydration: Be sure to have an adequate intake of water to help the lymph system flow smoothly.

Breathwork: Deep diaphragmatic breathing has been shown to oxygenate the blood and activate the lymph system. Breathe deeply in through your nose, hold for two counts. Exhale through your mouth for four counts.

Skin Brushing: Dry skin brushing helps release toxins and stimulate the lymphatic system. It is best done in the morning to release toxins built up while sleeping.

Keeping your lymph system healthy is a crucial part of any long-term wellness plan. If you would like support on your own path for wellness contact Dr. Melanie today about creating a personalized plan that fits your lifestyle.