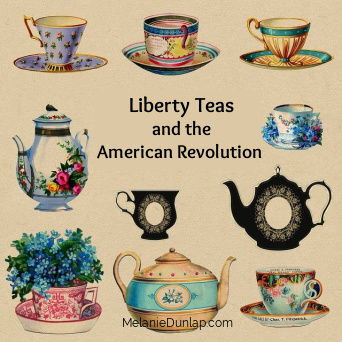 You’ve probably heard of that little scuffle called the Boston tea party. On December 16, 1773, a group of colonists board three British tea ships and dump 342 chests of tea into the harbor.

They were protesting the Tea Act of 1773 that reinforced a tea tax on the American colonies. That act also gave the British East India Company a monopoly on the tea trade and barred the colonists from buying tea from any other source.

Throwing tea into the harbor wasn’t the only way that colonists protested. Colonial women organized a campaign to ban English tea by circulating petitions and claiming that it was actually poisonous.

The act of rebellion that filled the Boston Harbor with tea was well planned, but what to do after that wasn’t thought out as clearly. Colonial ladies still had their tea accessories, cups, pots and tea tables, but they no longer had the English tea they were used to drinking.

They may have been colonists, but they still craved a good cup of tea.

With the help of native peoples and some trial and error, replacements were being discovered. Different herbs and fruits were used to make home brews known as “Liberty Teas.”

The herbs that were already popular in the garden for cooking or medicinal cures were also used. This included parsley, rosemary, thyme, marjoram, sage and others.

One plant that was quite popular during the American Revolution was the Ceanothus americanus. Also known by the common names of New Jersey Tea, Indian Tea, Walpole Tea and Redroot.

Ironically, the Ceanothus americanus was eventually shipped to England and the rest of Europe as one of American’s earliest exports. A true Liberty Tea!

Another favorite of the time was Goldenrod. If you are someone that suffers from allergies you might be thinking bad things about this plant right now, but they are probably unfounded.

It’s often blamed for seasonal allergies because of the prolific yellow flowers that you can easily see, but Goldenrod is not to blame for your sneezing. If you are suffering when the Goldenrod is in bloom it is most likely being caused by Ragweed.

They both bloom about the same time but Ragweed has an inconspicuous flower and very light pollen that floats through the air, getting into and irritating our sinuses. Pollen from the Goldenrod is heavier and has to be transported by insects.

A big bonus of Liberty teas was that most of them contained herbs with medicinal uses. Just like today, teas could be blended to treat their ailments. In those days it was the only reliable medicine.

Fortunately for us we don’t have to have an uprising before we can enjoy the delightful taste of herbal teas! Click Here for some of my own blends.

All of the herbs listed here are tasty in your teacup. Picks the ones that appeal to you then mix and match. Lemon balm and chamomile can help lessen anxiety. Rosemary is good for a headache. Raspberry and red clover can help balance a woman’s hormones. Peppermint is a great pick me up and can help drain your sinuses.

Thanks to the American revolution we have a greater appreciation for our own local plants.