The empty shelves looked eerie, the sign above was meant to inform consumers that romaine lettuce was not safe to eat. The black and white sign seemed bland compared to the urgency of the warning…this stuff could kill you.

When did my lettuce become deadly? When it contracted E. coli.

A recent discovery of lettuce contaminated with E. coli had triggered the recall of romaine lettuce from stores and restaurants. Standing in the grocery store looking at the vast amount of empty shelf space gave me a new perspective on just how much romaine lettuce we consume.

The popularity of bagged salad kits has exploded in recent years. It is estimated that Americans eat 25 pounds of lettuce per person annually. Last year we bought twice as many bags of packaged salads as heads of lettuce.

Lettuce, scientifically known as Lactuca sativa, was first cultivated by the Egyptians thousands of years ago. The plant was considered sacred in ancient Egypt. Later the Greeks and Romans cultivated lettuce as a crop. In Medieval times it was also used as a folk medicine for things such as insomnia, loss of appetite and tonic for the digestive system.

Lettuce is an excellent source of fiber and cellulose, which improves digestion and promotes long-term weight loss. It is also rich in vitamin A, vitamin C, vitamin E, and vitamin K as well as minerals including potassium, magnesium, iron, calcium and zinc.

How Does Lettuce Make People Sick?

E. coli is a bacteria that people and animals carry and excrete in their feces. In communities where animal farms are situated near produce farms, it is possible for E. coli to travel from the farms into the water supply that is used to irrigate produce. Humans can also be the culprit, if farms and housing developments share water supplies it is possible for E. coli to be transferred from people to produce.

Contamination can occur from large numbers of birds making frequents flights over the fields or low-lying fields can get flooded with contaminated water. E. coli can also be spread in the process of growing, packing or preparing produce if workers do not practice good hygiene. Manure on farm equipment can also be a source of contamination. In the last 10 years there have been an average of 11 outbreaks and 242 illnesses per year. While deaths are rare, they can occur, and hospitalization can be necessary in some cases.

Big farms aren’t the only ones that can get E. coli, backyard gardeners need to take the same precautions. Never apply uncomposted manure to growing food crops and use only potable water. Wash your hands before and after handling vegetables. 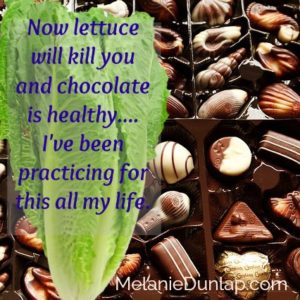 Although washing produce can reduce some contamination, it doesn’t kill bacteria. Commercial farms frequently rinse lettuce with a chlorine wash to kill pathogens but studies have shown those sprays are only partially effective. The same is true of washing fruits and vegetables at home. Even a powerful wash leaves behind enough E. coli to make people sick.

What makes E. coli so difficult to remove is that it gets into tiny cracks and crevices all over the leaf. When the produce is cut, like for a bagged salad, the bacteria can enter the inside of the leaf where no water will dislodge it.

Data from the Centers for Disease Control and Prevention suggest that leafy greens cause roughly a fifth of all foodborne illnesses. The most common sources are romaine lettuce and spinach. There is no chance for bacteria to be killed by hot cooking temperatures because most leafy greens are eaten raw.

An interesting statistic came out of the recent E. coli outbreak of romaine lettuce, 70% of those that got sick were female. Most likely because women’s diets tend to include more vegetables. A 2012 study of nearly 15,000 men and women published in the medical journal Clinical Infectious Diseases found a higher rate of men ate meat and some poultry than women, who ate fruits and vegetables in higher proportions.

How can you stay safe?

In 2011, Congress passed the Food Safety Modernization Act, which included new standards for irrigation water quality, worker hygiene and equipment sanitation. Those rules were fully implemented this past January for large farms and smaller farms have until 2020 to comply. The new rules should help but they can’t eliminate the risk completely. Lettuce is not grown in a sterile environment.

While nothing is guaranteed, there are some best practices that can reduce your risk of getting sick:

Despite the rare outbreak of contamination in our lettuce supply it is still considered a safe food and the health benefits far out weigh the risks. Eating fresh vegetables is still the tastiest way to stay healthy.