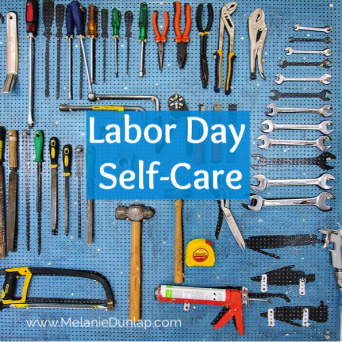 You might think that a wellness blog is a strange place to talk about the Labor Day holiday, but I think there’s a connection. From my perspective Labor Day started as a need for more self-care.

In the late 1800s, the US was in the height of our industrial revolution. At that time the average American worked 12-hour days, 7 days a week. Think about that for a minute, twelve hours every day with no day off. And they weren’t dream jobs either, most worked in physically demanding, low-paying jobs in unsafe conditions.

The first unofficial Labor Day was actually workers on strike. On September 5, 1882 American workers held a parade and marched from New York’s City Hall to a planned picnic at an uptown park. Organizers had hoped for more than the 10,000 marchers that showed up, but since many of the attendees risked losing their jobs by participating in the one-day strike, it was considered a success.

Taking a day off and spending time with your tribe sounds like self-care to me.

How Labor Day Became A Holiday

Even with a strong labor movement, it took five more years for government recognition. It wasn’t until 1887 that Oregon passed the first state bill recognizing a Labor Day holiday. By the end of that year Colorado, Massachusetts, New Jersey and New York had all passed their own legislation.

It took several more years and a crisis for the federal government to make it a holiday. In 1894 the Pullman Palace Car Company lowered wages and when workers complained they were fired. They decided to strike and when they did other railway workers supported their efforts by refusing to handle Pullman cars. Freight and passenger trains came to a halt around Chicago.

Some historians believe that President Grover Cleveland was afraid of losing the support of working-class voters so on June 28, 1894 he declared the first Monday in September to be “Labor’s Holiday” a legal public holiday.

To most of us Labor Day signals the end of summer, back to school, barbeques, parades and Labor Day sales that last for weeks. All too often, that day off turns into a day full of things to do.

According to the US Dept of Labor, “Labor Day constitutes a yearly national tribute to the contributions workers have made to the strength, prosperity, and well-being of our country.”  Peter McGuire was one of the first to suggest a day to honor those “who from rude nature have delved and carved all the grandeur we behold.”

Life may not be made of things but the things in our lives are made by working people.

You may still be wondering what Labor Day has to do with wellness. Here’s a tip: Use it as a time to check in with yourself.  Where are you putting your labor? It is a good time to take stock of the good things you have done and the things that need more work.

Remember to be kind. Working on yourself should always be a labor of love.