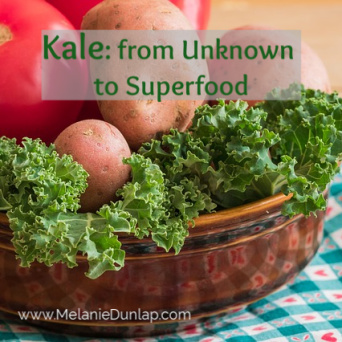 Growing up in the rural south my family grew a home garden for as long as I remember. I have fond memories of working in the garden. To this day nothing tastes as good as a fresh tomato sandwich with a tomato still warm from the sun and enough mayonnaise to make it slide out the sides of the bread.

We grew all kinds of vegetables from lettuce to potatoes. Some of my favorites were okra (you are either saying yum or gross at this point) spinach, green beans, squash and cucumbers.

That vegetable is Kale.

While it may be new to you, kale isn’t a new vegetable. It was cultivated in Europe before the Middle Ages when cabbage took over. Until then, kale was the most widely consumed vegetable. A cold weather vegetable, cooked kale and sausage are eaten to celebrate the arrival of winter in Germany.

In the 1980s green kale was in a few supermarket chains in larger cities. A farmer in Oregon named Tim Peters began experimenting with other colorful varieties of kale including blue-green Siberians. Peters created several new strains of red Russian kale that are used today by production farmers.

Now available in rainbow colors from pink to purple, Americans started noticing kale a little more, but we still didn’t know what to do with it.

That was about to change. Seems all kale needed was a little marketing.

An article written by Anna Brones for Blue Apron showed this timeline for kale in the US:

2007 ~ Kale makes its way into some organic Community Supported Agricultural boxes and people are confused about what to do with it.

2013 ~ The first annual National Kale Day is celebrated on October 2.

Kale is a cruciferous vegetable in the Brassica family. This family of plants also includes broccoli, cauliflower, cabbage, mustard greens, and brussels sprouts. Full of vitamins, minerals and fiber, kale is nutrient dense which is a measure of nutrients per calorie.

A May 2010 article published in “Diabetes Forecast” lists kale as a superfood because it provides high levels of many essential nutrients and may help to lower your blood pressure. Raw kale is the more nutritious choice as cooking lowers the availability of antioxidants and zinc.

Even with a superfood reputation, kale isn’t for everyone. Some people are put off by the slightly bitter taste. Antioxidant compounds called glucosinolates are partly responsible for the bitterness of kale.

The glucosinolates in kale may also affect iodine absorption and thyroid health in people prone to thyroid disease. Cooking kale reduces the effect on thyroid function and is a better option for people with thyroid disease. Kale has no adverse effects on the thyroid of healthy individuals. Talk to your healthcare professional if you have concerns.

How to Eat Kale

Even though I didn’t grow up eating kale and I still like okra better, it has found its way into my diet. Raw kale salad is delicious with acidic ingredients like vinaigrette dressings and citrus. To make raw kale more tender and sweeter, massage it before using. Sprinkle a little of your dressing on the kale, then rub it between your fingers until it starts to wilt and become softer. Some other ingredients that go well with kale are avocado, shredded raw Brussel sprouts, Parmesan cheese, mango, apple, pear, pumpkin seeds and pine nuts.

And of course, kale tastes great in smoothies!

If you haven’t tried kale yet give it a chance. You might find out what all the hype is about.

What are your feelings about kale? Do you have a favorite recipe to share? Let me know in the comments below.