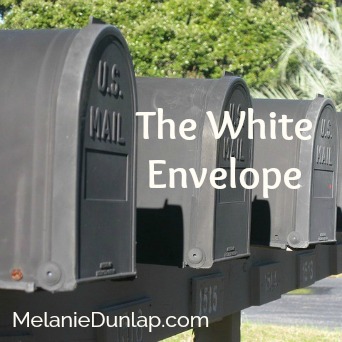 There were several days of mail in the box when I opened it. So many things had been going on lately and getting the mail just wasn’t on the priority list. These days the mail didn’t bring many good things, bills from doctors and EOBs from insurance companies made up the bulk of it. Just another reminder of how crazy things felt right now.

I skimmed through the pile as I walked back to the truck. A white envelope stood out from the others, it had my name on it and was from the breast center. I thought I knew what it was but just seeing the return address made me queasy.

The grocery bags in the front seat made a convenient holder for the mail as I got back in the truck. But even tucked in the bag that envelope stuck up just enough for me to see it.

As I walked through the door Tom was laying on the couch looking very weak and pale. My heart skipped a beat seeing him there. The past two months had been really hard on him. He made a move to get up to help me, but I smiled and said I could manage.

We both knew that normally he would have met me at the car and carried everything in himself. But right now, he wasn’t himself.

With the groceries safely on the counter I took out the mail and looked around for the letter opener. Even though I knew what the letter should say, my hand was shaking a little as I unfolded it and skimmed the paragraph.

I saw what I was looking for just as Tom got up from the couch. I quickly put the letter back in the envelope and set it down with the rest of the mail. I thought now wasn’t the time to share it with him.

There was an all too familiar look of pain on his face. He had endured 6 weeks of radiation with a good spirit and open heart, but his physical body was paying the price. The outward signs of radiation were mild compared to what was going on inside.

It wasn’t until almost the end of the 30 treatments that his right collarbone got a burn about the size of my little finger across the top of it. We were hoping he would not have any visible burns, so it seemed like a less than optimal outcome to us but to the doctor it was remarkable.

All through treatment his radiation doctor had commented on how wonderful his skin looked and how little damage he was showing. At his 5th weekly visit she finally asked what we were using on his skin that kept it looking so good.

Tom was happy to share about the all-natural Herbal Healing Salve that I make and sell. We had been using it on the burn area since his very first treatment. After questioning me about the ingredients, frequency of use and how it was made she asked if she could have a sample. I dropped off a sample the next day and at Tom’s next visit with her she told me that she had already recommended it to one of her patients.

But his visible burn was not the source of his pain today, it was the inside damage. His throat was burned so badly that swallowing was nearly impossible. Even water hurt going down. He knew that he needed to eat to keep his strength up, but after just a few bites he would be in so much pain it brought tears to his eyes.

Today was the first day in 6 ½ weeks that he hadn’t had a radiation or chemo treatment. It was cause for celebration, but he was feeling so terrible that a rousing woo-hoo was all he could muster.

His birthday was just a few days later and he still felt like crap. He got a birthday cake but his throat still wasn’t working so he couldn’t eat it. The last few weeks had been brutal, and he was struggling. But even when he felt his worst he kept his sense of grace and compassion for others.

He had a particularly bad night and was feeling pretty low the next morning. Even though he couldn’t eat he pulled out the chair for me to sit down beside him and eat my breakfast.

Our dining table is the catch all for everything. Sometimes we have to move piles to make room to eat and this morning was one of those. Tom moved a pile of mail to make room for my food and the white envelope fell to the floor.

He picked up the envelope and when he saw my name on it he asked what it was. “Just my test results,” I said as I sat down to eat.

It felt wrong to be eating in front of him when his throat was so sore he couldn’t eat so I got quiet and focused on my food. I didn’t see him pull the letter out of the envelope.

When I looked up he was reading the letter and crying. “Why didn’t you show me this?” he asked. “You already knew everything was okay,” I told him.

His voice cracked, “I know but it is different, seeing this in writing, it gives me hope.”

We wish to inform you that there is no evidence of cancer on your recent mammogram examination.