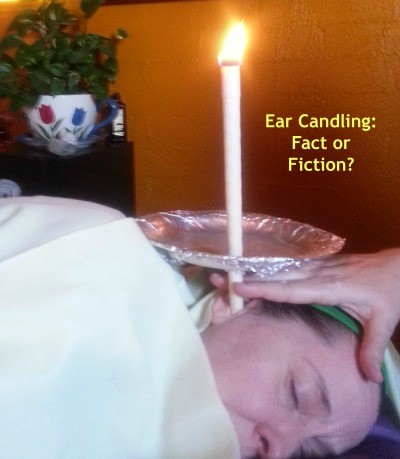 Ear candling doesn’t work. At least that is the impression you get if you google it.

According to Wikipedia “ear candling is both dangerous and ineffective”. As of 2008, there were two cases in which people have set their house on fire while ear candling.

Is ear candling dangerous? Yes. Anytime you are working with fire and people there is the potential of danger.

Does it work? You be the judge. I have several clients that come to me specifically for this procedure. They claim that it helps them with issues such as earaches, migraines, releasing blocked energy and stress. When I have my ears candled it seems to open them up and I can hear better.

But none of this is scientifically proven. In fact the medical profession strongly suggests against it. There was a time that the medical community said there was no such thing as germs and it wasn’t necessary to wash your hands…..we all learn as we get older.

Ear candles are made of cotton or linen that is wound into a cone shape, soaked in wax and then allowed to harden. This hollow candle is inserted into the external ear canal and then the opposite end is lit on fire.

See where the danger comes in?

You should never try to candle your own ears! This is a two person job and the person in charge of the burning candle needs to be a responsible adult. Other precautions include using flame resistant cloths to cover the body and keeping a bowl of water handy to quickly extinguish the burning candle.

Only you can decide if ear candling is right for you. Even if ear candling doesn’t produce a physical result that is immediately evident you still benefit from the time spent in quiet reflection and reduce your stress.