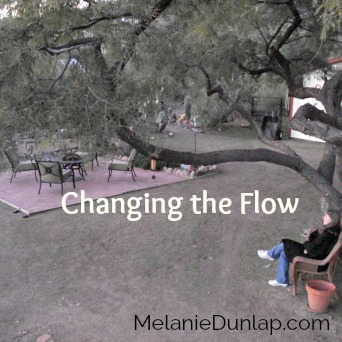 You never really think about where crap goes until it doesn’t go there anymore. For the last 3 weeks, I have thought about where it goes every day.

That’s because the septic system at the Peaceful Spirit Enrichment Center has failed. It’s like the Hotel California….water can come into the house but it can never leave. With no septic system, we can’t use the showers, sinks, washing machine, dishwasher or toilets.

I had already been dreading the month of June because it marked the anniversary of my breast cancer diagnosis, this just made it worse.

As luck would have it, the final failure would come a day before the June full moon Labyrinth walk. We were keenly aware of how blessed we are as we directed people to the port-a-poty or Sunshine house for a restroom.

A nice man with a job I don’t envy, dug some holes in the backyard and told us the news. Without doing major damage to find out the extent of what was going on he gave us a preliminary estimate that made my stomach hurt.

After he left we talked about what he had offered, it was merely a band aid and was estimated to only last 5 years. If it only lasted 5 years then what? Would we have to close the Center and give up our community?

It took another week of coordinating schedules to get all the right people out here at the same time to tear up a bigger section of the backyard for more answers. Even though the news was bad, it was the best of the bad news we could have gotten.

A couple more days went by before the estimate showed up in my email. I took a deep breath before I opened the attachment but it didn’t help. I hit print before it could sink in.

As I picked the paper up from the printer I looked down at the estimate.

My hands were shaking and I started to cry. This was just too much. Hadn’t the last year been tough enough? This was the month I was supposed to be celebrating survivorship but instead I was facing yet another thing that seemed so overwhelming that I didn’t know what to do.

But that tough year had also taught me that with support we can get through anything.

So, the tears were dried and the plans begun. We calculated the remaining space on our credit cards, listed my motorcycle for sale and sold some artwork at a cheap price. It wasn’t enough; but it was movement in the right direction.

At the last Labyrinth walk several people recommended we start a (click to give) Go Fund Me campaign because our community would want to help. I had resisted the idea because I felt like it was our problem and we should handle it.

When I realized just how many people were coming to us and asking how they could help I relented and started the campaign. I was embarrassed but out of options.

Money wasn’t the only impact this was having on the Center; our gathering space would also be demolished in the repairs. We would need to salvage as much as possible before they come in with equipment.

The patio and spiral garden were disassembled and the bricks saved for rebuilding. Giant pots were rolled out of the area, plants were relocated and the rocks that had lined the path were piled neatly in a safe zone.

As we take things apart it brings back memories and we talk about the good times. We reminisce about all the changes that have been made over the years as our circle has grown.

Even though it is a bit sad to know that it will never look this way again there is also excitement about what will come next.

And just like they always do, our community is coming together and making things happen! You continue to donate to our Go Fund Me campaign by clicking here, you have helped with the disassembly and have offered to help rebuild after the repairs.

We are touched by your kindness and our hearts are full. Thank you!