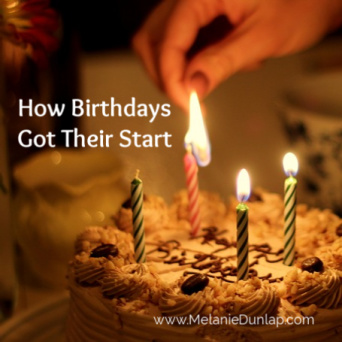 Did you ever wonder why we celebrate birthdays the way we do? The cake, candles and of course the song. The happy birthday song. The Guinness Book of World Records recognizes “Happy Birthday” as the most recognized song in the English language.

The happy birthday song as we know it today was adapted from an 1893 book by sisters Patty and Mildred Hill. Both were kindergarten teachers in Louisville, Kentucky when they published their book Song Stories for the Kindergarten and Primary Schools. The first song in the book was one that teachers could sing each day to welcome students, it was called “Good Morning to All.”

Good morning to you,

Good morning to you,

Good morning to all.

There has been some disagreement about how the lyrics got changed to happy birthday. One version is that the Hill sisters were invited to a friend’s birthday party and Patty changed the lyrics to make the occasion more festive. However it happened, the birthday version stuck.

The exact origin of birthdays is unclear, but researchers have put together a pretty good guess. Turns out we have the Egyptians to thank for the birthday even though it wasn’t a celebration of birth as we think of it. When pharaohs were crowned, they were considered to have transformed into gods. That coronation date was celebrated as the Pharaoh’s “birthday”.

The first mention of a birthday celebration was in the bible, Genesis 40:20, referring to a Pharaoh’s birthday, thought to be around 3,000 B.C.E.

Early Christians wanted no part of birthdays, they considered them to be pagan rituals. Christians believed in “original sin” and the fact that the first birthday celebrations were tied to pagan gods made them evil. Around the 4th century, Christians changed their minds and began to celebrate the birthday of Jesus as the holiday Christmas.

Ancient Romans were the first to celebrate birthdays for the common man. But only the men. It wasn’t until the 12th century that female birthdays were celebrated.

German bakers are credited with creating the birthday cake as we know it today. In the late 18th century a party called, kinderfeste was held for German kids, or “kinder” as they are known. The kinderfeste featured a birthday cake adorned with candles.

The cake had one candle for each year they had been alive and one additional candle in the hope of living another year. Blowing out the candles while making a wish was also a part of the celebration.

Easier access to birthday cakes also gave us some interesting traditions. A southern tradition says that the number of candles left burning after you blow on them will predict how many years until you get married. I don’t know what it is supposed to mean if you are already married. Another tradition involves baking a dime or thimble into the cake and whoever gets it in their slice will become rich. You just have to hope they see it before they swallow it.

While some birthday traditions have changed over the years it seems we all still love cake, candles and the happy birthday song. Whether you want a quiet celebration or want to do it up big the choice is yours. So whatever type of birthday celebration makes you happy, do that!

Have you ever celebrated your birthday in an unusual way? Tell us about it in the comments below.