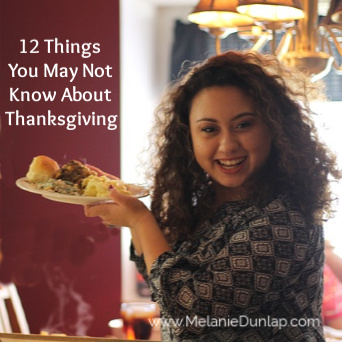 You know the traditional story of Thanksgiving with Pilgrims, Native Americans and food. But did you know that it was a woman that got it recognized as a national holiday? Writer and editor Sarah Josepha Hale convinced President Abraham Lincoln to officially declare a recurring holiday on the last Thursday in November. Known as the author of the children’s poem “Mary Had a Little Lamb”, Sarah wrote countless articles, editorials and letters to the president urging the creation of a national day of thanks. Hale kept at it, even after the Civil War broke out, and Lincoln wrote the proclamation just a week after her last letter in 1863.

However, Thanksgiving hasn’t always taken place on the fourth Thursday in November. In 1939, Franklin Roosevelt moved the holiday up one week to help boost retail sales during the Depression. So many people complained that it was eventually moved back to the original date in 1941. The Thanksgivings between those years were referred to as “Franksgivings”.

When we gather around the table.

91% of Americans eat Turkey on Thanksgiving. The average turkey for Thanksgiving weighs 15 pounds.

Approximately 859 million pounds of cranberries are produced each year, and Thanksgiving is responsible for about 20 percent of the sales. Marcus Urann canned the first jellied cranberry sauce in 1912.

Campbell’s soup created green bean casserole for an annual cookbook in 1955. It now sells 40% of its total sales of mushroom soup in the Thanksgiving season.

It takes about 7 hours to cook a Thanksgiving dinner. People spend roughly 16 minutes eating it.

The average person eats enough each Thanksgiving to gain 1.3 pounds.  The average American will consume about 4,500 calories on Thanksgiving Day, or about 3,000 for the meal and an additional 1,500 for snacking. 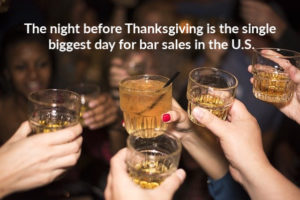 You may have heard that the tryptophan in turkey makes you sleepy after a big Thanksgiving dinner. That’s not true. In fact, pork, chicken and cheese all contain higher levels of tryptophan than turkey. Instead, the reason you get tired is overeating. Digesting all that food requires a lot of energy.

Thanksgiving and the TV dinner.

You are not the only one trying to figure out what to do with all the leftovers. In 1953 a worker at Swanson ordered 260 tons more frozen turkey than they needed. A company salesman named Jerry Thomas came up with the idea to create a packaged dinner on aluminum trays. With the addition of dressing, peas and sweet potatoes onto the trays the TV dinner was born.

The ones that get away.

President George H.W. Bush started the tradition of pardoning the white house turkey in 1989 after he noticed the 50-pound bird at his official Thanksgiving proclamation looked a little antsy. Every president has upheld the tradition to this day. But what happens to that lucky bird? In 2005 and 2009, the turkeys went to Disneyland and Walt Disney World parks to serve as grand marshal in their annual Thanksgiving parades.

In fact, black Friday is the busiest day of the year for plumbers! Thanks to all that food we gobble up on Thanksgiving and houseguests stressing out the plumbing system, Roto-Rooter reports that kitchen drains, garbage disposals, and yes, toilets, require more attention the day after Thanksgiving than any other day of the year.

5 thoughts on “12 Things You May Not Know About Thanksgiving”